The Freddy Files Description: "Charlie's childhood friend and crush. John is a writer and a keen observer of the world around him. He cares deeply about Charlie, always offering her support no matter how difficult or dangerous the situation. John is wise for his age, and he can often be quite sarcastic."

John is described having messy brown hair. In the diner scene in the beginning of The Silver Eyes, he wore a light-green button-down shirt, with the sleeves rolled up and the collar open, and a brown long sleeve jacket. It’s not described what type of leg wear he wore.

In The Freddy Files, he is shown having fair skin, green eyes, and brown hair. He's shown wearing a white shirt with a brown jacket and gray jeans.

He's sarcastic at times and witty. He puts himself at risk for the people he cares about, especially Charlie.

In The Fourth Closet, John was traumatized and depressed after the events of Charlie's apparent death. He became obsessive over her.

Charlie is John's childhood crush. At the end of the The Silver Eyes, when John told Charlie if they’re ever going to see each other again, Charlie responds with "maybe", since when she’s with him, she’s reminded of her childhood tragedies.[1]

In The Twisted Ones, they go on a date, and at the end of the book, John tells Charlie that he loves her.

In The Fourth Closet, after Charlie's death, he was so into her, that he wrote out all of his memories with her and about her in a notebook. He thinks that the Charlie that appeared after her death wasn't actually her, which turned out to be true.

Appearing in Chapter 1, John reunites with his childhood friends Jessica, Charlie, Carlton in a diner to attend the launch of a scholarship dedicated to his old friend Michael Brooks, who went missing a decade earlier due to an incident at Freddy Fazbear's Pizza. They then decide to revisit Freddy Fazbear's Pizza, a restaurant Charlie's father once owned. Carlton claims that an incomplete shopping mall has been built in the restaurant's place.

Upon further investigation, the friends discover the restaurant is still standing and that the mall had been built around it. After they find a way to break in, they explore the abandoned restaurant and find that the animatronics, Freddy Fazbear, Bonnie, and Chica, which were built by Charlie's father, were still on stage.

The next day, John and his friends attend the scholarship's launch ceremony at their old school, where Michael's parents give a speech about him. Afterwards, John confesses to Charlie that he remembers seeing a strange person in a yellow Freddy costume at Freddy Fazbear's Pizza on the day of Michael's death, and he now suspects this person was Michael's killer.

That night, John, Jessica, Charlie, and Carlton return to the restaurant, accompanied by their friends Lamar, Marla, and her 11-year-old brother Jason.

They discover the still-functioning control panel which makes the robots move, and Charlie finds a fourth robot, Foxy, which cuts her arm with his hook. The next morning, haunted by recent events, Charlie tells John that before moving to Hurricane her father owned another restaurant called Fredbear's Family Diner, which featured two performing robots, yellow versions of Freddy Fazbear (Fredbear) and Bonnie the Bunny (Spring Bonnie).

John drives Charlie to the abandoned diner in New Harmony, and she remembers the day her brother Sammy was abducted by someone in a Bonnie costume, which led to the diner going out of business and Charlie's parents divorcing. She suspects that Sammy's abduction and Michael's murder are connected.

That evening, his group of friends go to Freddy Fazbear's Pizza again, but are caught by the mall's security guard Dave, who threatens to call the police. Charlie offers to let Dave explore the restaurant with them, and he accepts. Inside, the friends play with the control panel, and while they are distracted Dave retrieves a yellow Bonnie costume from a closet and abducts Carlton, which Jason witnesses.

The friends flee the restaurant and fetch Police Officer Dunn, only to find that the restaurant's door has been chained up while they were gone. Police Chief Clay Burke - Carlton's father - does not believe their story, and assumes Carlton is playing a prank. Charlie later talks with John about her father; he closed the restaurant and committed suicide after Michael was murdered, leading many people in the town to suspect he was the killer.

Charlie and John go to a library to research the history of Fredbear's Family Diner, and find an old newspaper article about Sammy's kidnapping with a photograph of Dave, who the newspaper identifies as the diner's co-owner. Jason runs off, intending to rescue Carlton, and Charlie, John, Lamar, Jessica, and Marla break into the restaurant to find him. Finding Carlton, Charlie undoes the springlocks and frees him from the costume.

As they search for a way out, the four robots come to life and pursue them through the restaurant. William reveals that the robots are possessed by the vengeful ghosts of his victims, and boasts that they will hunt down and kill any intruders. The group tries to hide in a party room, but all four robots corner them.

However, they are halted by the arrival of a fifth robot, the yellow Freddy (Fredbear/Golden Freddy) from Fredbear's Family Diner, which Charlie realizes is possessed by Michael's ghost. The yellow Freddy allows them to leave, and Chief Burke arrives to search for the missing Officer Dunn. William attacks in the yellow Bonnie costume, but Charlie activates its springlocks, killing him.

As the robots drag William's corpse away, Chief Burke escorts everyone out of the mall. The friends go their separate ways, and before leaving Hurricane.

John went on a date with Charlotte after she was with Clay, talking about the dead man's body out in the field. He went with Charlotte to eat at a Thai restaurant he invited her to.

After eating at the Thai restaurant, they went to see a movie called Zombies vs. Zombies, it reminded Charlie about her twin brother Sammy. After the date, John took her to the park; Charlie said "it was awkward". When she went home, Jessica was excited and asked "So? how did it go?". Unwilling to reply truthfully, Charlie nervously answered "It was ok".

Later on, they discover that the authors of this are animatronics are created by William Afton. Not only that, but they also discover that Charlie is the target of these creatures. Knowing that more people could die, the girl decides to go alone to the next point where the animatronics were going to attack, being captured by them.

She is taken to an underground pizzeria, where she is quickly rescued by her friends, who had followed nothing more nor less than the original animatronics of Freddy Fazbear's Pizza. However, they are surrounded by twisted animatronics, commanded by William Afton, who is now undead; With his new body, he calls himself Springtrap .

They manage to escape their attackers, even managing to burn down Twisted Bonnie and Twisted Wolf . Then Charlie sees that Springtrap escapes and starts chasing him, leaving her friends behind.

When they are about to leave, Charlie is captured by Twisted Freddy (who is terribly damaged) and introduced into the springlocks trap. Although his friends tried to free her, the trap is activated and Charlie is crushed by the mechanisms of the suit.

As Charlie's friends mourn over her death, a woman drives up and got out. She was slim and tall, with long, straight brown hair that glistened in the sun. She strode purposefully toward the diner. They all watched motionless, as if the slightest sound might rupture the illusion and send her away. The woman was almost at the door.

They rushed to the doorway to meet her just as she walked in. Arty seemed confused, his mouth opened slightly and his brow furrowed. John watched for a steady moment, then turned away decisively, facing across the table with a grave expression. He didn’t speak until Arty met his gaze. “That’s not Charlie.”

At the beginning of the novel, John continued his work as a construction worker, completely torn about Charlie's assumed death. He dealt with nightmares about Charlie and his past involving Freddy's, a constant reminder of his losses. This led to him waking up late, losing focus and energy, and lack of motivation-- common symptoms of depression. These symptoms caused him to be fired from his job, something that he had expected would occur.

He kept Charlie's old childhood robot's, Theodore's, still-functioning head on his nightstand. His apartment was barely furnished and was quite messy. He spent most of his time laying on his bed, theorizing about reasons Charlie could still be alive. He was entirely unwilling to see Charlie, and the time after her "death" was spent alone.

Eventually, Jessica encouraged him to get together with the rest of the old childhood crew (aside from Lamar), he reluctantly shows up at Clay Burke's house and meets his friends once more. Clay also encouraged him to stay, despite his urges to leave. When Charlie showed up, he had left the house out of fear-- only to be caught by her. He doesn't accept that she's truly Charlie; nonetheless, the two agree to meet up again at the Thai restaurant they went to on their first date the next day.

After their awkward "second date" of some sort, John went back to his apartment, still unsatisfied. He refused to believe that whoever he had gone with to the restaurant was truly the Charlie he grew up with. His theorizing continued, and he occasionally visited Clay Burke to discuss the truth.

Later on, Theodore's head began to speak to him, repeating "Shining Star, Sliver Reef". He spoke with Jessica, and the two discover that Silver Reef was an old ghost town. When they traveled to the abandoned area, they saw an arch with a star, which they concluded to be the "Shining Star". They ventured to the house atop a hill, where Charlie's Aunt Jen resided. While they were there, they discovered Charlie trapped in a box, and Aunt Jen was killed. John took the real Charlie to his house to rest and hide.

Eventually, as Charlie recovered and became healthier, they ventured back to Aunt Jen's house. Here, the fake Charlie appeared in an attempt to kill Charlie. John was attacked, knocked down for a long time. When he awoke, both Charlies were (truly) dead.

At the end of the novel, an injured John very vaguely told the childhood crew about Charlie's death. He went to the cemetery where Charlie had taken him a long time ago and followed the same path she took. In his head, he began thinking about how Charlie told him that she remembered him confessing his love for her, scolding himself. Approaching two small, plain tombstones, he suddenly felt as though he was being watched. He turned around and saw a girl, who is assumed to be Charlie, standing beneath a tree a few yards away, extending her hand towards him. John's mind went numb, and he walked towards the woman under the tree. 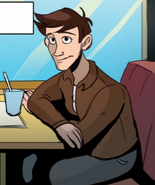 John as he is depicted in the graphic novel.

John as seen on the cover along with Charlie and the Twisted Animatronics.

The Fourth Closet: The Graphic Novel

John as seen on the cover along with Springtrap and the Funtime Animatronics.