Not what you were looking for? See Emily (disambiguation).

Jenny Emily, also known as Aunt Jen, is one of the characters in the Five Nights at Freddy's novel series. After the death of her brother, Charlie was taken in and cared for by her.

The Freddy Files Description: "Jen stepped in as Charlie's guardian after the death of her father, Henry. She taught Charlie to be ready for the harshness of the world, which is the reason why Charlie is so independent. Aunt Jen believes painful memories are better left forgotten."

She's described to be a middle-aged woman with dark hair and dark blue eyes.

Charlie described her as loving but severe, as she taught Charlie self-reliance above almost anything else.

Before The Silver Eyes

Note: Information gathered from TSE, TTO, and TFC are grouped together to make the placement less confusing.

After Charlotte's death, Henry went into a deep depression and poured his agony into a rag doll for two months, bringing it to life. Henry believed that the rag doll had the spirit of his late daughter and decided to build four robotic copies of her, each replicating his daughter's state of growth. One day, Henry showed Jen the first robot, the toddler copy of Charlie (who gets later repurposed as Ella.) She told him that he could still reunite with his wife and son, the remaining part of his family that Henry left behind, but he didn't listen to her.

In July of 1985, after five children went missing at Freddy Fazbear's Pizza, Henry built a robot to commit suicide. Before he ended his life, he wrote a suicide letter to Jenny telling her to take care of Charlie. After Henry's suicide, Jenny went to pick Charlie up from school and told her that her father died. Jenny told Charlie that she was going to spend a couple of days with her. Jen brought her back to Henry’s house to get some clothes. Jenny carried Charlie up to her room and told her to pack her things in a suitcase. Even though Charlie couldn't fit all of her clothes, Jen assured her that they would come back for the rest, but they never did.

Jenny takes care of Charlie for years, teaching her how to be independent. She also paid off the mortgage of her brother's home but was still paying property taxes. When Charlie reached her teenage years, Jen took her to her brother’s house to switch the child copy of Charlie to the teenage copy of Charlie. Jen owned an old blue Honda, but before she let Charlie have it, she had insisted that Charlie should know how to change a tire, check the oil, and know the basic parts of the engine.

Jenny is mentioned multiple times by Charlie. Jen didn't directly encourage Charlie not to attend the scholarship ceremony dedicated to Michael Brooks, but she wasn’t pleased about her returning to Hurricane. She let Charlie use her car. Jen packed emergency supplies in the trunk of her Honda.

At the end of the book, Jenny sees her niece dead inside Twisted Freddy holding her free arm.

Jen pulled Charlie out of a pile of scrap from a junkyard and took her to her home located in Silver Reef, where she was living for some time, and repaired her. Jen kept Charlie locked inside a chest. Jen also has Henry’s suicide robot stored in one of the closets of her home.

Theodore's head kept repeating the phrase, "Shining Star, Silver Reef". John and Jessica then venture out to Silver Reef and found Aunt Jen in a house on top of a hill. They have a conversation with her, stating that she owes them an explanation, but they were interrupted by someone knocking on the door. John and Jessica are told to hide. The one knocking on the door was Baby, disguised as Charlie much to Jen's shock and confusion.

While hiding in a room full of boxes, John moved to a large chest with no lock. John found the handle and opened it, revealing Charlie curled up and resting.

When they heard screams, they decide to make a run for it with Charlie, still sleeping. As they were escaping, John saw Aunt Jen's dead body with her stomach ripped open.

John and Charlie later return to her home, forcing them to see her dead body with Charlie later avengeing her aunt by using the suicide bot to kill Baby although she too dies in the process.

Jenny showing her love to Charlie after her father's death. 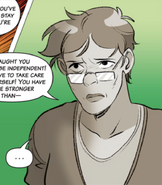 Jenny telling Charlie that she wanted her to be independent and stronger than Henry.
Español
Community content is available under CC-BY-SA unless otherwise noted.
Advertisement