Jack-O-Bonnie is a Halloween-themed reskinned variant of Nightmare Bonnie who first appeared in Five Nights at Freddy's 4 where he replaced his original counterpart for the Halloween Edition.

His appearance looks exactly like his original variant with the exception of Halloween-themed colors. Rather than being blue-purple, Jack-O-Bonnie is brownish-orange/green in color. His muzzle, chin, stomach, and the insides of his ears are colored in red-orange. In place of his normal endoskeleton eyes, the eye sockets are quite brightly glowing orange and yellow, just like an actual stereotypical Jack-o-lantern. If look carefully, both suit-covers of his hands and foot are mixed with red-orange, light orange, and darker brown-green colors with parts from few fingers of his left hand colored in light turquoise-green. The shade of his teeth are glowing light-yellow that allow his endoskeleton jaw to glow in a little bit dimmed light. He lacks both a nose and an endoskeleton head as well with his endoskeleton teeth being the only exception. While lacking an endoskeleton head, the hole on the side of his head extends to the back of it. His endoskeleton chest is also absent which exposes his backbone with two strings of red wire visible from under his bowtie. A similar effect appears to have been applied to his overall body colored in shining yellow tints, as they can be seen within the torso as well as some endoskeleton parts such as fingers, few limbs, backbone, pelvis, feet, right ear frame, and the top of his left ear. Eventually, his bowtie glows brilliantly in orange/yellow color. Unlike Nightmare Bonnie, a texture for Jack-O-Bonnie's suit armors is slightly smoother with no sign of any scratches.

Like his original-colored counterpart and other nightmare animatronics, Jack-O-Bonnie is a cold, intimidating creature who hunts down on his victim like a predator beast.

Jack-O-Bonnie's behavior is nearly identical to his regular variant; however, there are some differences. From the Left Hall, he doesn't seem to duck down a little while retreating, unlike his original variant. Very much like an actual Jack-o-lantern, bright shining colors from within his body and head causes him to glow in the dark. Jack-O-Chica shares the same effect.

While Jack-O-Bonnie's jumpscaring the player from the Left Hall (especially from the very first frame of his jumpscare), the flashlight's light beam is much dimmer than from the Standard Edition.

Similar to Jack-O-Chica, his jumpscare animation from the Left Hall and Bedroom is slightly faster. From the Bedroom, he is straight while performing his jumpscare, making it a complete different style of his jumpscare.

Jack-O-Bonnie returned in the Curse of Dreadbear DLC for Five Nights at Freddy's VR: Help Wanted, where he appeared in the Danger! Keep Out! game mode with Jack-O-Chica.

Jack-O-Bonnie's still image frame, before attacking the player. Notice the differences between this and the original.
Add a photo to this gallery

Jack-O-Bonnie's still image frame, before attacking the player, brightened.
Add a photo to this gallery

Jack-O-Bonnie in his respective teaser.

Jack-O-Bonnie in the Extra menu.
Add a photo to this gallery 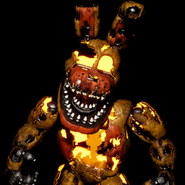 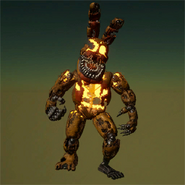 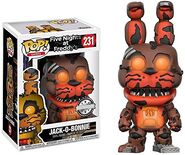 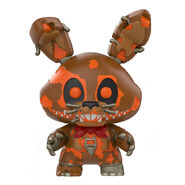 Jack-O-Bonnie's Walmart-exclusive Mystery Mini.
Add a photo to this gallery

Start a Discussion Discussions about Jack-O-Bonnie