Not what you were looking for? See BB (disambiguation).

JJ is a different-colored counterpart of BB with a currently unknown origin. She made her first appearance in Five Nights at Freddy's 2 as a minor hidden animatronic.

Though her model is exactly the same as her ordinary counterpart BB, she has blue cheeks and magenta eyes, a purple nose and eyelids, and the red stripes on her propeller beanie are instead bluish-purple as well as a button from on top being blue, with blue propellers and a yellowish-orange button. Her shirt also has the same pattern as her propeller beanie cap, with purple and blue stripes.

In Five Nights at Freddy's 2, her rosy cheeks are magenta instead of blue while her beanie button lacking a propeller is colored red than blue.

Little is specifically known about JJ's personality, save for the fact that she, judging by her laughter heard in Ultimate Custom Night, is implied to be a cheerful sort of character.

Occasionally, the player may encounter JJ hiding under the right side of the desk in the Office while looking directly at them. JJ does not appear to affect the player, neither attacking or jumpscaring them. She seems to simply disappear if the player checks the Camera Monitor.

JJ finally returned in Ultimate Custom Night as one of the many selectable characters.

Similar to BB, she will attempt to sneak in through the right side vent. Failure to close in time will result in JJ slipping in the Office then hide under the desk, disabling the player's door controls for a short limited of time, lasting approximately 10 seconds before vanishing away.

The challenges in which JJ is present are as follows:

A full texture of JJ's appearance while hiding under the Office desk.
Add a photo to this gallery

A full view of JJ as she appears in the right air vent. 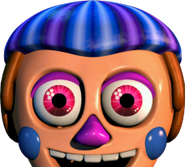 JJ hiding under the desk.
Add a photo to this gallery

JJ's head for the Ultimate Custom Night demo troll game.
Add a photo to this gallery

JJ from Survival Logbook at page 19.
Add a photo to this gallery

Retrieved from "https://freddy-fazbears-pizza.fandom.com/wiki/JJ?oldid=3277425"
Community content is available under CC-BY-SA unless otherwise noted.