The holiday animatronics are seasonal animatronic skins that were introduced in Five Nights at Freddy's AR: Special Delivery on March 12, 2020 with the release of Shamrock Freddy.

They are counterparts that bear some identical resemblance to the original animatronics, albeit designed with special traits based on holidays, chronologically including St. Patrick's Day, Easter, and Day of the Dead. 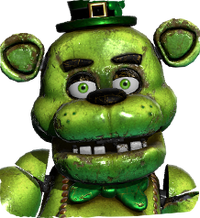 Shamrock Freddy is a St. Patrick's Day variant of Freddy, and appeared in the 2020 St. Patrick's Day event on March 12, 2020, then later on October 1, 2020 for the second round of the mashup event, and once again on March 15, 2021. He is Freddy's first custom skin and officially the very first skin ever released.

Shamrock Freddy's suit is recolored green, along with his pupils being green instead of blue. His top hat is replaced with a leprechaun's hat that has a four leaf clover attached to it. He also has a necklace made of gold beads and an entirely golden microphone. 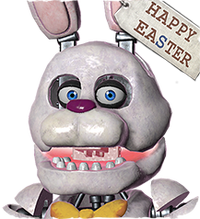 Easter Bonnie is an Easter variant of Bonnie who is added on April 16, 2020 as the Easter event's second and last skin. He is Bonnie's second custom skin, after Chocolate Bonnie.

Easter Bonnie's suit is recolored white, with his eyes being blue instead of purple. Instead, his nose is purple. His bow-tie is yellow and his belly has striped patterns with various colors akin to an Easter egg. A tag that reads "Happy Easter," is attached to his right ear, with the "S" in Easter being blue while the rest of the letters are brown. 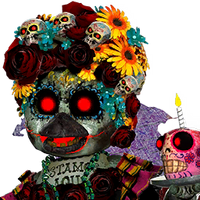 Catrina Toy Chica is Toy Chica's variant based on the Day of the Dead celebration, added on October 22, 2020 as the Halloween event's first and only skin. She is Toy Chica's second custom skin, after Highscore Toy Chica.

Catrina Toy Chica's suit is rusty white with a black beak, black eyes and red pupils. Her head is covered with a crown of flowers and skulls with a purple veil flowing behind her. She wears a red and black dress with tears on the bottom, and her apron is shortened so that it's only around her neck. It reads, "estamos aqui," which translates roughly to "we are here," in English, symbolizing how those who die live on in spirit. The cupcake is decorated with painted on flowers and a mustache around its gritted teeth and has the same black eyes and red pupils as Catrina Toy Chica. Atop its head is a blue and white striped candle that's lit.