Not what you were looking for? See Emily (disambiguation).

Henry Emily is a pivotal character of the Five Nights at Freddy's novel series. He co-founded Fredbear's Family Diner and Freddy Fazbear's Pizza alongside his business partner, William Afton. An engineer with artistic imagination, he personally built all the animatronics and their technology.[1] In 1983, one of his children was murdered, which forced Fredbear's to close. Two years later, five children went missing at Freddy's. Due to the amount of grief and pain he felt, he killed himself by building a robot only for committing suicide.

In The Fourth Closet, it was revealed that his daughter Charlotte Emily was the one murdered by William Afton instead of his son Sammy. Henry went insane as he loved Charlie so much that he couldn't live without her, and due to his obsession, he recreated his daughter to cope with the loss.

Henry was known for wearing a lot of flannel shirts. Seeing that his body can fit perfectly inside a springlock Fredbear suit, it can be assumed he is tall.

In the graphic novels, Henry is depicted as having brown hair and chin hairs, and wears a white flannel shirt along with dark pants.

Henry had a deep love for his daughter, Charlie. He used his skills to create mechanical toys for her, like Stanley and Theodore.

It was revealed that Henry was bereaved and has reached a level of grief, despair, and agony, evidenced by his suicide note to his sister and Charlotte's "memories" in The Fourth Closet. He seemed isolated and terribly alone in his grief that he seemed disconnected from reality. Clay Burke observed that he often was so absorbed in his work and that there was something off about him, "almost shell-shocked."

Before The Silver Eyes

Note: Information gathered from TSE, TTO, and TFC are grouped together to make the placement less confusing.

Henry was married to an unknown woman and was the father of twins, Charlotte Emily and Sammy Emily.

Henry was a loving father, especially with his daughter Charlotte. In 1982, Henry and his business partner, William Afton, decide to open a restaurant called Fredbear's Family Diner, whose main attraction was two animatronics: Fredbear and Spring Bonnie. Henry invented the springlock system and used it in the two animatronic suits, which can change between suit and animatronic. Charlie described him as being happy during the time of Fredbears, he let everyone be a part of the diner. In the same year, Afton kidnapped and killed Henry's daughter, Charlie, which led to the diner closing.

Henry went into a deep depression and bought an Ella rag-doll and cried in it for two months, pouring his agony into the doll. He then unintentionally created the "spark of life," which gave the doll life. He then recreates her as a robot. He made four animatronic dolls, each replicating his daughter's state of growth: toddler, child, teenager, and a full-grown adult. In addition, he used the illusion discs to have the appearance of Charlie, if she was still alive. Henry began to believe that the dolls were actually Charlie. He recorded his "daughters" memories from a tripod, which most were edited upon. When he showed the littlest Charlotte to his sister, Jen gets upset and tells him that he still has time to go with his lost family, which he slowly strayed away from. Even though he acknowledges his sister's attempt to make him move on, he couldn't because he was too absorbed in recreating his daughter. When he reached Charlotte's third stage of recreation, he realized that he's gone mad and on her fourth one, was made full of rage and despair that he stopped building it and realized that the dolls weren't actually Charlie.

Henry built toys for Charlie. Even though there were some scrapped toys, there were three finalized toys, Theodore and Stanley, and soon when Charlie's done with her toddler stage, Ella. While he built and Charlie played with her toys, the unfinished fourth robot at the corner of his workshop was staring at them, unknowingly with rage, Henry's rage.

Years later, they decided to open another restaurant known as Freddy Fazbear's Pizza, which has four new animatronics: Freddy, Bonnie, Chica, and Foxy. Charlie remembered her father building all of them in his workshop. Michael Brooks, one of his daughter's friends, along with four other children, was lured and murdered by William dressed in a yellow Freddy suit. This forced the closure of the pizzeria. Henry was suspected to be the murderer of the five children but was never convicted as Clay and the whole police department knew it was Afton who was responsible.

Henry, grieved by everything that occurred to him, decides to build a robot to end his life. Before ending his life, he wrote a note to his sister, saying that he has done permanent damage to himself, and to keep the fourth closet shut, and to demolish his house if done right.

The Silver Eyes - The Fourth Closet

Henry is mentioned throughout the novel trilogy mainly by Charlie. 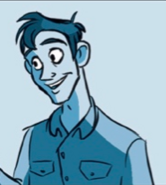