The heatwave animatronics are a series of animatronics based around heat and fire, who appear in Five Nights at Freddy's AR: Special Delivery as limited time animatronic skins. They were introduced for the Sizzling Summer Event that started on July 23, 2020. 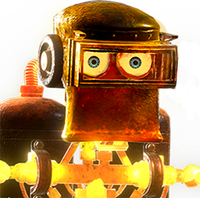 Flamethrower Endo is Endo-01's variant and the first heatwave animatronic skin released on July 23, 2020. It is also Endo-01's first skin.

Flamethrower Endo is a dark brown color, compared to Bare Endo, and parts of its body's metal glows in the extreme heat it produces. It wears an angular welding mask over its head, with a rectangular glass visor that shows its blue eyes. The rest of its face is unchanged besides the mask, as seen when pulling the mask up in its workshop animation and its jumpscare. Its left hand has been replaced with a flamethrower, as its name implies. The flamethrower constantly spews flame in the workshop, and is connected to two fuel tanks in Flamethrower Endo's back through a thick brown cable. Said tanks are both ovular shaped, and connected through multiple pipes; a large one at the top and four smaller ones in the bottom. The tank is connected to Flamethrower Bare Endo through three straps of bolted on metal, two vertical across the shoulders and one horizontal across the torso. 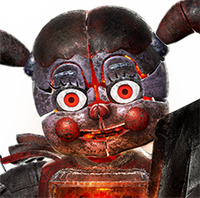 Broiler Baby, also known as Stove Baby in the files, is a variant of Circus Baby and the second heatwave animatronic skin released on July 30th, 2020. She is Circus Baby's first skin, not counting 8-Bit Baby.

Broiler Baby keeps the original's general color scheme. Her red hair, nose, cheeks, shoes and dress are covered in the furnace's dust. Broiler Baby's eyes are now a deep red in color. Broiler Baby is modelled after a coal stove, featuring a square stove in the center of her torso with burning firewood in it at all times. Her endoskeleton is a glowing dark reddish-orange from the heat this broiler causes her to emit. Instead of a microphone, Broiler Baby carries a long coal shovel, rounded off at the tip. 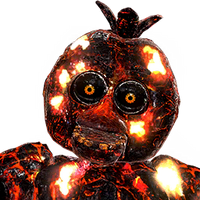 Scorching Chica is the third heatwave animatronic skin released on August 6, 2020. She is also Chica's second skin added to the game, with the first being Liberty Chica in the previous event.

Scorched Chica is a charred black in color, seemingly made out of molten, stone-like material. Her suit is severely cracked in various places, deforming the shape slightly, and she's missing her bib. Scorching Chica's main feature is the apparent lava visible through the cracks in her suit, a dark red in color. It often erupts in small explosions across her body, sparking the liquid outwards. Her eyes are black with glowing red irises that occasionally flicker off. She holds the Scorching Cupcake in her tray, which also appears completely burnt. 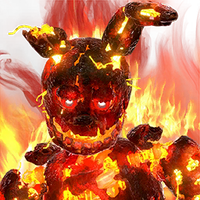 Flaming Springtrap is Springtrap's heatwave skin, as well as the fourth and final heatwave animatronic skin, released on August 13, 2020. He is also Springtrap's second skin, after Toxic Springtrap.

Flaming Springtrap is the same as Springtrap, but he is a dark amber orange in color instead. The main difference is that fire seems to pour from Flaming Springtrap's rips, seemingly as a reference to the Fazbear's Fright burning incident. As a result, the entirety of Springtrap's insides glow a bright hot yellow as red-heat effects, nearly unnoticeable among the flames. His hands also glow the same bright red-heat colors. Flaming Springtrap has dark red voids with white pupils for eyes.