Happiest Day minigame is a sixth and last hidden minigame in Five Nights at Freddy's 3 to complete. Along with the end-of-night minigames, this is the only minigame not to be replayed from the Extra menu.

"Happiest Day" is not a Night-Specific minigame. The player can access the minigame on any night by going to Hall (CAM 03) and double-clicking on the character drawing of the Puppet on the right wall.

The player controls the Puppet, who can only walk left or right. Walking past several kids wearing animal masks, the player can go to the far right of the level to find a crying child. To the left of the table, there will be as many children wearing gray masks as have been unlocked from the other minigames. Without all five minigames completed with Cake Endings, the player can only exit via the Exit door; no cake will appear on the table unless the player has all the Cake Endings complete and runs into the table.

If the player has all five minigames beaten with their respective cake endings, there will be four children wearing Freddy, Chica, Foxy, and Bonnie masks to the left of the table. Running into the table will place a cake on the table. The crying child to the right of the table will now have a Golden Freddy mask on. All five children and the child that the player is controlling will then disappear, and their masks will fall to the ground. The six balloons will then fly upwards through the room barrier, mostly out of view. Finishing this ending will trigger a unique star to appear on the main menu, and this is saved to the game file as a unique variable signifying that the Good Ending has now been realized and the souls of William Afton's victims can finally pass on in peace. 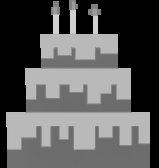