Grimm Foxy is an antagonist in Five Nights at Freddy's VR: Help Wanted's DLC, Curse of Dreadbear. He is one of the two new animatronics included in the DLC mode, with the other being Dreadbear.

From his multiple renders and official art, Grimm Foxy appears to hold a sort of "Jack-O-Foxy" role. He is a large, bipedal animatronic fox sporting orange-red fur, with an overall structure similar to Nightmare Foxy. Rips and tears are spread out across his suit, with most of the damage being on his torso. In a similar vein to the the other Halloween-themed nightmare animatronics, he is missing his endoskeleton head, and a bright orange glow emanates from inside the suit. His left hand is structured in a similar way to the other nightmare animatronics, with five segmented fingers ending in sharp claws on each finger, while his right hand bears a large sickle, in contrast to his usual hook. He wears brown pants that are ripped from the knees down, and his legs end in trapezoidal feet with four claws protruding out of it.

His head is split into two segments, with the fabric on his muzzle gone, revealing the metal frame underneath. The fur on his ears is nearly gone, also revealing the metal framework. Unlike Nightmare Foxy, Grimm Foxy retains his eye patch, and the tops of his eye sockets are intact, giving him a much more angry look. As a visual aesthetic, flames stream out from inside him whenever he walks or runs. Another added detail is the black spikes that extend out from his shoulders.

Grimm Foxy replaces Foxy in the Danger! Keep Out! mode of the Curse of Dreadbear DLC for Help Wanted, behaving the exact same way as his counterpart from the first game. When he attacks, he will first peek out of the curtains, then he will come out further and get ready to charge. Due to being a reskin of Foxy, the Easter Egg from leaving the Office still exists. The only way to prevent his charge is to use the Light button on the camera when he is fully visible.

He also appears in the Corn Maze level in the Afraid of the Dark mode. There, he wanders around the maze, occasionally scraping his sickle on objects and singing to himself, chasing after the player if he notices them. As more keys are collected, Grim Foxy begins to become faster and more aggressive. The only way to hide from him is to use the numerous cutout character sets scattered around the maze, which, if performed successfully, will cause Grimm Foxy to run past his hiding spot, disappear, and teleport to somewhere random around the maze. He can also be seen in the Game Over screen, where he is found standing behind the closed gates, scratching the brick-structured column. 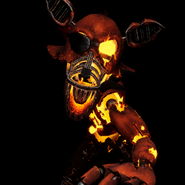 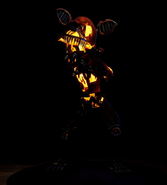 Grimm Foxy in the gallery (front).

Grimm Foxy in the gallery (side). 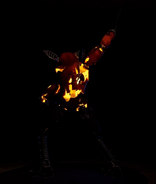 Grimm Foxy in the gallery (back).
Add a photo to this gallery

Grimm Foxy found behind the gates.

Grimm Foxy sprinting towards the player in Corn Maze.

Grimm Foxy scraping his sickle on the pillar, animated.

A single frame of Grimm Foxy with fire.

One of Grimm Foxy's 3D Renders. 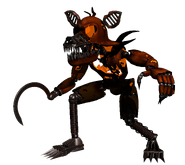 One of Grimm Foxy's 3D Renders. 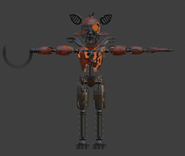 Grimm Foxy's model, found in the files.
Add a photo to this gallery 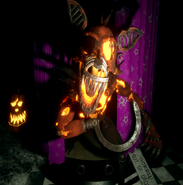 A rare glitch of Grimm Foxy, consisting of his arm clipping through the wall. 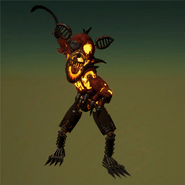