Not to be confused with Greg from the Fazbear Frights continuity.

Gregory is the main protagonist of Five Nights at Freddy's: Security Breach.

Gregory is a small, thin child with apricot skin, messy brown hair and brown eyes. He has bandages on both his right cheek and his left knee. He wears a blue t-shirt with a pale blue collar and two white stripes positioned horizontally across his chest (as seen in the poster). He also wears a white singlet underneath his shirt. He wears tan cargo shorts that go down to his knees. For footwear, he wears white socks as well as white, red and cyan-colored sneakers with dark grey soles.

Gregory is an irritated and outspoken kid. Usually, whenever he gets slightly annoyed or angry, like when he got a "crappy" or "stupid" item or realized he had five more hours to survive, he openly makes a comment to showcase his rage. Likewise, he will immediately complain to anyone if he dislikes something they're doing, such as when he told Freddy to shut up in a slightly aggressive tone. On the other hand, he is cautious to the point that he appears to be distrustful. In his quest to leave the Mega Pizzaplex before closure, he prefers to hide from Vanessa instead of accepting her help, as he is doubtful of her intentions in spite of her position as a security guard and Freddy's prompt to trust her.

Gregory is a brave kid, as rather than just endlessly escaping from the Glamrock Animatronics with Freddy's help, he resolves to confront them in order to collect their improved features. In doing so, he also demonstrates to be quite pragmatic, as he figures out ways in which he can use the environment and objects at his disposal to his advantage to achieve his goals. He is somewhat resentful, as he expresses no remorse when proposing the idea to disable the animatronics to Freddy, and refers to it as "what they deserve" due to their constant attempts to capture him, even after Freddy suggests that their current behavior was the result of an external agent. As intrepid as he can be, he nonetheless isn't without fear, as he is shown to be quite afraid of Vanny.

Although he is somewhat vengeful, Gregory has shown that he worries about others and can perform acts of great altruism. He was concerned with the numerous missing children in the Mega Pizzaplex, so much so that he opted to stay to investigate and put an end to the disappearances, despite how risky it could be and having the option of finally abandoning the establishment. Several of his traits have probably developed as a result of his own independence, suffering from homelessness and most likely needing to fend for himself.

Throughout his journey to survive the many menaces spread across the Mega Pizzaplex, Gregory comes to develop a strong bond with Glamrock Freddy. He constantly relies on him and follows his advice without hesitation, while at the same time trying to help Freddy the best he can when the necessity arises, possibly seeing him as a father figure.

Gregory can hide to avoid animatronics or throw objects to distract them, but he will have to quickly move to avoid being spotted. If he spends too long in a hiding place, the animatronics are likely to find him there. He has a flashlight that he can use to see in dark places that he received in the Daycare, and he carries a Faz-Watch on his wrist, where he can access his missions, the camera system, and the map of the Pizza-Plex, though the map is unlocked later in the game. The watch has unlimited power, but it does show the power level of Gregory's flashlight, and it tells him if it needs to be recharged. He can also use weapons to temporarily stun enemies. To get past animatronics directly, he will need Glamrock Freddy's help to do so, or use the Faz Cam or the Fazer Blaster to stun them.

It is later revealed that before the events of the game, Gregory may have been homeless, in which case he may have either ran away from home or he is orphaned, now living in a cardboard box. He later traveled to Freddy Fazbear's Mega Pizzaplex, likely to live in. However, he later learns of the pizzaplex's secrets and, after closing time, all of the doors lock, trapping Gregory inside.

After being trapped inside of Freddy Fazbear's Mega PizzaPlex, Gregory must move through the building, avoid animatronics, and uncover the truth about the PizzaPlex.

Gregory in the key art of Security Breach.

Gregory's in-game model from the back, as shown in the gameplay trailer for Security Breach. 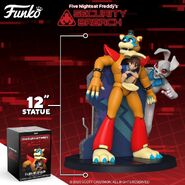 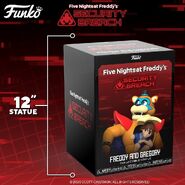 Gregory sleeping in the Bad Ending, just before being found by Vanny