>>>>>> is one of three glitched enemies encountered in FNaF World.

>>>>>> is a photo-negative entity that flickers between the models of Prototype and Gearrat. It appears in negative colors, mostly white and skyblue due to the color effects. 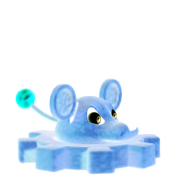