The Glamrock Endos are the endoskeletons engineered for the Mega Pizzaplex's glamrock animatronics and appear in Five Nights at Freddy's: Security Breach as a group of hostile enemies.

The Glamrock Endo is a very high-tech version of the original endoskeleton, being gray in color as usual like Endo-01 and Endo-02, but having a much stronger build, with its torso being covered in gold wires, and its eyes glowing red.

However, later in the ending, it is shown that their eyes were glowing red as they were controlled by something else, similar to how the maintenance bots are controlled via a remote.

The Glamrock Endos can only move when the player is not looking at them. When the player stares at it, it will motionlessly stand there. When the player looks away, it moves toward them to attack. Most often they tend to be inert until the player performs an action which awakens them.

Players however, do not need to look at them directly, but rather their directions. The player can also watch their movements through the cameras or while hiding.

Briefly, one crawls on a wall in the Utility Tunnels as a harmless entity, foreshadowing their later appearance in the story.

It is the skeleton/framework of Glamrock Freddy, Glamrock Chica, Montgomery Gator, Roxanne Wolf, Glamrock Bonnie, Glamrock Mr. Hippo, and (partly) Burntrap. The endos may appear in large groups and were first encountered in the Warehouse. Several also appear in basement area of the Fazbear Theater, and staying a long time in Bonnie Bowl sees a group of them crawl out from behind the bowling area.

Only one non-hostile endo appears active in the Parts and Services and simply stands there twitching.

Two hanging Glamrock Endos were last seen from the Underground's starting area during the Canon Ending. These Glamrock Endos get off their hooks as Gregory turns on the generators, making them active threats. 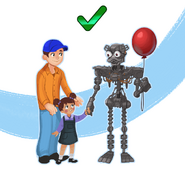 A poster of the Glamrock Endos. 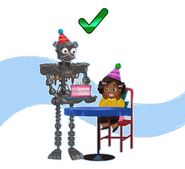 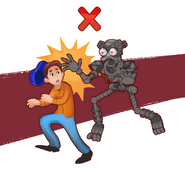 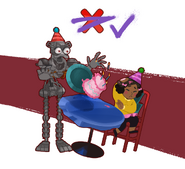 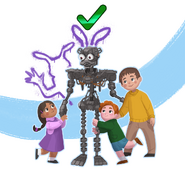 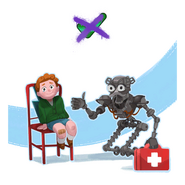 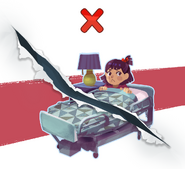 Glamrock Endos pouring out of the men's room.

Detailed blueprints of the Glamrock Endos.