The Glamrock Animatronics are revamped, punk rock-themed characters from Freddy Fazbear's Mega Pizzaplex. They appear in Five Nights at Freddy's: Security Breach as primary antagonists (except for Freddy).

Currently, there are two brand-new animatronics, with two other animatronics based on their original counterparts. The Glamrock animatronics feature a much more anthropomorphic design than previous characters and wear punk accessories with an '80s theme, namely face paints, oversized shoulder pads, mildly-spiky bracelets and other types of jewelery.

The glamrock animatronics were made to function as the mascots for Freddy Fazbear's Mega Pizzaplex. Their technology appears to be relatively advanced, as they are capable of moving around freely (unlike typical animatronics that only move on a set pattern) and each seems to have extremely advanced A. I and self awareness, as they are capable of holding and starting conversations without set replies and have almost complete free will.

All of the glamrocks (except Freddy) are corrupted by Vanny's control and therefore are directed to kill Gregory. Each animatronic has unique function : Glamrock Freddy is able to open his stomach in a manner akin to the Funtime Animatronics, allowing for Gregory to take shelter from the threats in the pizzaplex. Montgomery Gator has special claws to open particular gates with, Glamrock Chica has a special voice box that can produce a loud shriek, while Roxanne Wolf has unique eyes that allows her to see through walls.

It's possible that the glamrocks cannot be easily replaced, as Fazbear Entertainment seems to install new characters instead of making a new version of a "lost" animatronic, with the most prominent example being Glamrock Bonnie's replacement by Montgomery Gator. The exact reason for this is unknown. However, it could be that the technology used to make them is relatively new and advanced, making it rather expensive and/or difficult to work with. 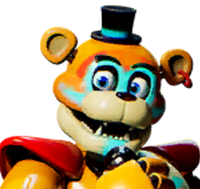 Glamrock Freddy is a friendly glamrock counterpart of Freddy Fazbear, the vocalist of the glamrock band, and the mascot of Freddy Fazbear's Mega Pizzaplex. He is the only Glamrock animatronic to escape Vanny's corruption and guides Gregory in Security Breach. 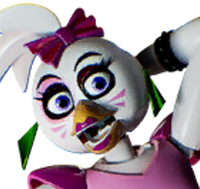 Glamrock Chica is a glamrock counterpart of Chica and the guitarist of the glamrock band. 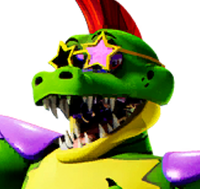 Montgomery Gator is an alligator animatronic and the current bassist of the glamrock band, serving as Glamrock Bonnie's replacement. 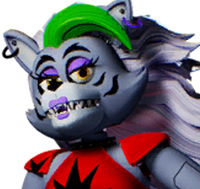 Roxanne Wolf is a wolf animatronic and the keytarist of the glamrock band, serving as the original Foxy's replacement.

While she made her first official appearance in Security Breach, she actually originated from Freddy in Space 2. 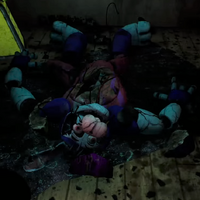 Glamrock Bonnie, the mascot of Bonnie Bowl, was an animatronic present in Freddy Fazbear's Mega Pizzaplex sometime before the game takes place. For unknown reasons, he was decommissioned and replaced by Montgomery Gator. According to an employee log, many kids asked where Bonnie was, leading the Pizzaplex staff to consider removing references to Bonnie from the location, including his bowling alley.[1] In a security report log, it is stated that Bonnie was last seen entering the Gator Golf course. One of the many theories speculates that Bonnie was destroyed by Montgomery Gator, most likely due to Monty's aggression.[2] 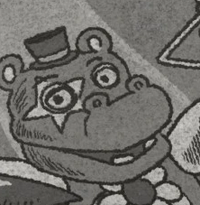 Glamrock Mr. Hippo is a minor animatronic only seen in a newspaper article in an ending of Security Breach. In that ending, the newspaper image reveals that Mr. Hippo has taken Monty's place as the bassist, with Monty now taking the role of Glamrock Freddy as the lead singer of the band.

Glamrock Mr. Hippo is a glamrock counterpart of Mr. Hippo and simply plays the triangle. He has a flower on his chest and a star around his eye and leg.