Ghost Freddys are enemies encountered in the Stellar Pit level from Freddy in Space 2.

They are ghostly versions of Freddy Fazbear in turquoise color and empty black eyes. 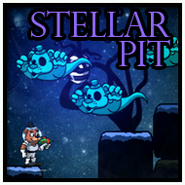