Funtime Freddy is an antagonist in Five Nights at Freddy's: The Fourth Closet. He serves as the alternate counterpart of Funtime Freddy from Sister Location and a secondary mascot at Circus Baby's Pizza.

Funtime Freddy's design seems to be a combination of Withered and Classic Freddy's designs with a white color scheme with mauve accents. His head appears to be squarish and less bulky than Withered Freddy's. He has a mauve purple color on his stomach, shoulders, elbows, knees, insides of his ears, cheeks, thighs, knuckles from his right hand, and the top areas from both feet. Like the other animatronics, he has faceplates that can pop open. For some unknown reason, it seems as if he is the only animatronic to have two sets of faceplates.

In his left hand, he holds a microphone, unlike every other Freddy, and similar to Baby. Also unlike his game counterpart, Bon-Bon doesn't replace his right hand.

Similar to Funtime Foxy, Funtime Freddy has a small, round speaker in the middle of his chest. He also has a black bowtie right under his chin, a black circle on the back of his hand and two black buttons on his stomach.

Funtime Freddy stands at a height of 6.0 ft and weighs 350 lbs, just like in the games.

Later, Funtime Freddy chases Carlton through a hallway, but he manages to trick Freddy into going underneath the carousel before turning it on, crushing him with the machine.

Some time after this, Freddy's remains are injected with the remnant of the original animatronic's endoskeletons, haunted by the children's spirits. Freddy's remains help Amalgamation along with Funtime Foxy and the Bidybabs to throw William inside the furnace, killing him, sending the ghosts into the afterlife to turn him and Mangle into lifeless scrap.

Funtime Freddy on the poster included with the Five Nights at Freddy's Collection. 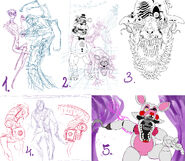 Funtime Freddy on the cover of Five Nights at Freddy's: The Fourth Closet.

Funtime Freddy the first cover of the book.

Funtime Freddy on the sleeve of the Five Nights at Freddy's Collection.

Funtime Freddy in the Office.
Community content is available under CC-BY-SA unless otherwise noted.
Advertisement