Not what you were looking for? See Spring Bonnie (disambiguation).
Or were you looking for Plushtrap from the fourth game, or the Dark Rooms levels from the VR game. 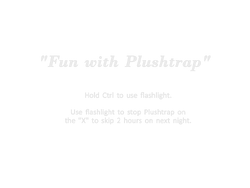 Fun with Plushtrap is a minigame that can be played after beating each night (nights before Night 5 only) in Five Nights at Freddy's 4. It is a minigame in which the player flashes their flashlight at Plushtrap to stop him as he runs back and forth towards them in a dark hallway.

The goal of the minigame is to stop Plushtrap on the "X" on the floor in front of the player. The player must listen carefully for the sound of Plushtrap's footsteps then turn on the flashlight each time the footsteps are heard for a few seconds. If the player succeeds, they are rewarded with being 2 hours ahead on the next night (1 hour if challenges and/or cheats are enabled.) If the player fails to stop Plushtrap on the "X", they will be attacked, resulting in a "too bad" screen. Running out of time results in a "too bad" message which does not directly result in a jumpscare. If the player fails, they will be put into the next night without the skip.

As the week goes on, the time to complete the game decreases. The minigames start with 90 seconds (1 and 1/2 minutes) after Night 2 and end with 30 seconds (half a minute) after Night 4.

The Plushtrap minigame starts in darkness, with Plushtrap sitting in the chair.

The still image of Plushtrap standing in the middle of the corridor before sitting down.

Plushtrap quickly getting up on the chair (click to animate).

Plushtrap sitting in front of the chair (click to animate).

Plushtrap peeking out of the far left doorway.

Plushtrap peeking out of the far right doorway.

Plushtrap peeking out of the near left doorway, which is particularly difficult to see.

Plushtrap peeking out of the near right doorway.

Plushtrap sitting on the X
Add a photo to this gallery

Nightmare Balloon Boy on the chair.

Nightmare Balloon Boy on the floor.

Nightmare Balloon Boy on the "X".

Nightmare BB getting back up into the chair (click to animate).

Nightmare BB sitting down, farther away from the player (click to animate).

Nightmare BB, hiding in the far right hall (click to animate).
Add a photo to this gallery
Retrieved from "https://freddy-fazbears-pizza.fandom.com/wiki/Fun_with_Plushtrap?oldid=3264518"
Community content is available under CC-BY-SA unless otherwise noted.