The game begins with the player becoming a franchisee of Fazbear Entertainment, Inc. and gaining ownership of Freddy Fazbear's Pizza Place. The pizzeria begins/began as a small, empty building, leaving it up to the player to customize and build up their business with their meager sum of $100.

The pizzeria is viewed in two forms: blueprint mode, where the player spends money customizing the building, and the Office, where the player spends each night running menial tasks for the business. After their shift, the player is also tasked with evaluating animatronics that have appeared in the alleyway near the Pizzeria to claim them as salvage. These include Molten Freddy, William Afton/Scraptrap, Scrap Baby, and Lefty. While salvaging all four yields a financial bonus to the player and is required for the game's canon ending, they become a hazard that attempt to attack the player in the Office, climbing through the vents on the left and right side of the office.

Upon completion of the game's final night, the player employer who is revealed to be Henry Emily the original founder of Fazbear Entertainment and former business partner of William Afton reveals that the vent system has been disconnected from the main building, preventing the animatronics from reaching children in the pizzeria, and thus trapping them. Henry then burns down the building using remote burners built in the floor, with himself, the player, and the animatronics inside, destroying all of them except for William.

At some point after the events of Freddy Fazbear's Pizzeria Simulator, the burnt remains of the pizzeria would collapse into a sinkhole, and be left almost entirely abandoned. Freddy Fazbear's Mega Pizzaplex would be constructed on the surrounding land, with Roxy Raceway over the sinkhole. At some point, an elevator reaching down the sinkhole to the pizzeria was built, Recharge Stations were installed in the basement and dining room, and a Security Bot was set to patrol in front of the building. Generators were brought in, and a high voltage cable reaching up to the Pizzaplex was installed, causing brown outs at Roxy Raceway.

Dufflebags found at Roxy Raceway reveal that employees had become aware of the possibility of a sinkhole due to segments of the racetrack cracking after concrete had been poured, leading to the discovery of both the cable and the elevator. A team went down to investigate but never returned.

In the game's Burntrap Ending, Gregory takes the upgrades from the other Glamrock Animatronics and installs them into Glamrock Freddy, allowing the two to navigate into the sinkhole and to the abandoned pizzeria. There, they confront and defeat Burntrap, burning the remains of the pizzeria in the process.

The manager's office in the pizzeria. 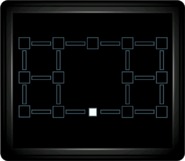 The security map of the Underground Labyrinth, featuring the ventilation system through which the animatronics travel.

Ditto, but with the pizzeria shown above it.

The show stage in the opening cutscene.

The arcade room in the opening cutscene.

Ditto, but in the Completionist Ending.

The private stage in the opening cutscene.

Ditto, but with eyes.

Inside the pizzeria's ruins, with dining table.

Inside the pizzeria's ruins, by the stage show.

Inside the pizzeria's ruins, a hole leading to the basement.

The Blob resting between the hole and the basement.