The pizzeria's main mascot is Glamrock Freddy of the glamrock band, which also includes Glamrock Chica, Montgomery Gator, and Roxanne Wolf. The pizzeria also houses the Staff Bots as well as The Daycare Attendant and DJ Music Man.

Rather than being a simple family-style pizzeria restaurant, as with previous installments in the series, Freddy Fazbear's Mega Pizzaplex is a large, three-story tall family entertainment center, fit with various attractions typical of such an establishment.

Fazer Blast is a laser tag arena in the Pizzaplex, themed after Glamrock Freddy. It has a very strong space theme, as the bots used in the attraction are modeled after aliens and it has cardboard cutouts of the glamrock band as "Space Cadets". It is also the area where Gregory obtains the Fazerblaster, and decommissions Glamrock Chica.

Monty's Gator Golf is a miniature golf course in the Pizzaplex, themed after Montgomery Gator. It has a jungle theme to it, mainly in the form of alligator props and cutouts, and possesses a ball pit around the main course. It's also the only place where Faz Cameras are sold (despite flash-photography being banned in the area), and is where Gregory obtains one and decommissions Monty.

Roxy Raceway is a go-kart racing track in the Pizzaplex, themed after Roxanne Wolf. During Security Breach, it's still under construction, however, it appeared to have a desert theme to it. It also possessed the Glamrock Beauty Salon, a hair salon. It's also the area where Gregory decommissions Roxy.

Mazercise is a fitness area in the Pizzaplex, themed after Glamrock Chica. It has the tagline of "Chica's delicious path to fitness!" and described as having a new maze every hour. Oddly, despite being a fitness area, it sells various unhealthy foods, like pizza, nachos, fries, and cookies.

The Superstar Daycare is a daycare center in the Pizzaplex, run by the Daycare Attendant. It has a large playground and ball pit for kids to play in.

Rockstar Row is a large museum-like area in the Pizzaplex. It has cases filled with props from both new and old animatronics. It's also where all of the glamrock animatronics' green rooms are.

Bonnie Bowl is a bowling alley in the Pizzaplex, originally themed after Glamrock Bonnie, though the theming was removed after Bonnie's disappearance. It also possessed an Ice Cream Parlor, run by Circus Baby-inspired attendent bots.

Fazcade is one of two arcades in the Pizzaplex, with a DJ booth run by DJ Music Man.

Superstar-cade is the other arcade in the Pizzaplex. As of Security Breach, it's out of order.

Kid's Cove is a play area in the Pizzaplex, themed around Foxy.

The Pizzaplex possesses a few restaurants: Faz-Pad, a coffee shop, Cupcake Shop, a bakery, and El Chip's, a Mexican restaurant.

Parts of the Pizzaplex

A billboard from Help Wanted showcasing the pizzeria; albeit during construction.

The entrance to the pizzeria from the trailer.

The Kitchen. Notice "Moon" on the top left crawling on the shelves.

An unknown place, most likely a storage room. Notice (presumably) Vanny's shadow on the right.

An ice cream area with the service bots.

An office or meeting room.

Another view of Fazer Blast Arena.

An early version of hole 6 in the Monty Golf minigame.

A part of Monty's Gator Golf. Seemingly inside someone's body, as there is visual references to fleshy insides and rib cages and fish bones.

Another image of Monty's Gator Golf. Seemingly coming out of the fleshy inside body area.

The Atrium. Notice "Bonnie Bowl" in the background.

Sewers. Note: Glamrock Chica is sitting down appearing to be dismantled and broken beyond repair.

Montgomery Gator's Green Room, only seen in the trailer. 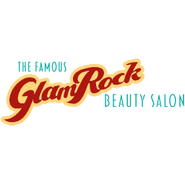 Ditto but with Glamrock Chica and Roxanne Wolf

Ditto but showing a game of golf

Illustrated Directory of the Pizzaplex 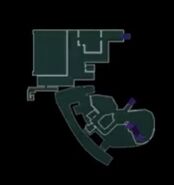 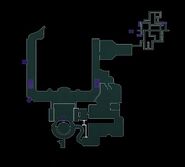 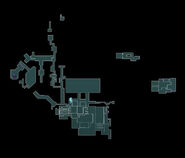 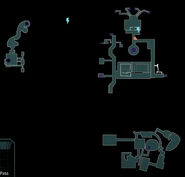