Not what you were looking for? See Fredbear (disambiguation).

Fredbear is the precursor to Freddy Fazbear from the Five Nights at Freddy's franchise and a mascot of Fredbear's Family Diner, alongside of Spring Bonnie.

Seen physically in Ultimate Custom Night, Fredbear's appearance is similar to Golden Freddy from the first game but his top hat and bow-tie are purple rather than black, and seemingly glow.

Upon closer inspection when compared to Freddy, Fredbear has a different model shape. His ears are rounder and less pointy, his tophat is smaller, he has smaller eyebrows, his whiskers are placed in different positions, he's slightly chubbier and he has a different head shape. Seen in his jumpscare, Fredbear is a springlock animatronic having the same body and arms as Spring Bonnie. This makes sense because it is confirmed he is a springlock in Five Nights at Freddy's 3 and Five Nights at Freddy's 4 during the phone calls and mini-games.

In plush form, he resembles a Golden Freddy plush but with purple accessories and buttons.

Like Freddy, Fredbear entertains children and sings on stage with his partner Spring Bonnie. It could be assumed that his personality is similar to Freddy, albeit with minor differences.

Fredbear is first mentioned by Phone Guy on Night 5 of the second game while planning on contacting the diner's original owner and said that the restaurant was closed years ago and onward.

While Fredbear once again does not appear in Five Nights at Freddy's 3, a yellow bear animatronic appears in the secret "STAGE 01" mini game along with Spring Bonnie.

Phone Guy (via the employee training tapes) mentions that there are two springlock suits and that one of them is specifically a Spring Bonnie suit. The other suit is speculated to be Fredbear's.

Despite Springtrap being found, nothing relating directly to Fredbear was discovered for Fazbear's Fright: The Horror Attraction.

Fredbear makes his second appearance in Five Nights at Freddy's 4 as both a plushie and animatronic in the minigames.

Seen from the end-of-night minigame after Night 5, he is also revealed to be responsible for the incident that is commonly referred to by fans as the Bite of '83.

His nightmarish counterpart, Nightmare Fredbear, makes his appearance in the main gameplay.

Fredbear's plushie appears in Five Nights at Freddy's: Sister Location as a cameo, seen on the desk in the Private Room. It is currently unknown if this means anything, or if it is just there for aesthetic purposes. Clicking the plush's nose makes the same nose squeak from every other game, both before and after.

To summon Fredbear, Golden Freddy must be only active and set him to 1 with no other animatronics active then proceed to purchase a death coin then use it on Golden Freddy. Note that this will not work if Dee Dee appears and summons another animatronic during the night.

Now, the player needs to purchase a Death Coin with ten Faz-Coins, and Freddy's hat with purple tint should appear on the desk within the Office. Using a Death Coin while Golden Freddy is present will cause Fredbear to immediately jumpscare the player and end the night.

Like most of the animatronics in Ultimate Custom Night, Fredbear speaks during the game over screen, though all of his voice lines are garbled and distorted.

Fredbear in the end-of-night minigames.

Fredbear's suit, being operated by a person.

Fredbear's shadow projected from his stage.

Fredbear, as he appears on the wall to Fredbear's Family Diner.

A poster of Fredbear himself. 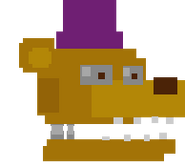 Sprite of Fredbear having his mouth stuck after the bullies shove the crying child into his mouth.
Add a photo to this gallery

Fredbear's plush as seen on the Private Room's office desk.
Add a photo to this gallery

Fredbear's mugshot in the teaser revealing his inclusion in Ultimate Custom Night.

The top hat that appears in the office to signify that Fredbear is able to be summoned.
Add a photo to this gallery 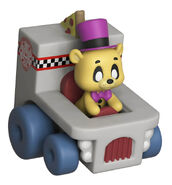 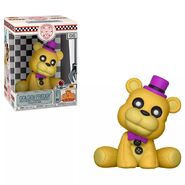 Besides the laughter, note that all three voicelines are heavily low-pitched and difficult to hear actual words. These lines may be misquoted or inaccurate.