Foxy is a major antagonist in the Five Nights at Freddy's series. Foxy is a discontinued animatronic pirate fox entertainer housed at Freddy Fazbear's Pizza. He resides at his own separate stage in the pizzeria. Secretly, Foxy and the other animatronics are haunted by children murdered by a man named William Afton. He and the others are now seeking revenge against their killer by attacking any adults in the pizzeria after-hours in blind rage.

He was the pirate fox entertainer when the first Freddy Fazbear's Pizza was opened in 1983 (however, it's unknown if he was discontinued or not).[1] In 1987, he and the original animatronics had all fallen into severe disrepair and Foxy was replaced by his newer counterpart for the "improved" Freddy Fazbear's Pizza, Mangle.[2] After the pizzeria's closing, as well as the Toy Animatronics being scrapped, he and the original animatronics were refurbished for the new pizzeria,[3] as of the events of the first game. However, after the closure of the new pizzeria, he and the other animatronics got dismantled by their killer. His soul, along with the others, was presumably set free, as evidenced by the good ending.

Foxy is a large, animatronic fox with crimson, tattered fur. He has yellow eyes, red eyebrows, and three strings of hair from the top of his head. He has a hook for his right hand and his left hand has been worn down to the endoskeleton. He also bears an eye patch that is folded over his right eye, although he is usually seen with it above his eye rather than covering it. Unlike the stereotypical fox, Foxy doesn't have a tail.

Foxy wears brown linen pants that are especially shredded at the legs. He appears to be damaged, as parts of his machinery are exposed. It can be clearly seen that both his legs, with the exception of his upper thighs, and his left hand is completely bare, exposing the metal endoskeleton underneath. His chest is ripped in various places, showing the endoskeleton beneath, and his arms and stomach are torn apart as well, with tufts of fur on the shoulders. He also seems to have a slightly droopy left eyelid. Like all of the other Fazbear characters, Foxy has a set of teeth. Foxy's teeth, however, appear to be the sharpest out of all the animatronics, being similar to those of an actual canine, while the other animatronics' teeth resemble human-like dentures or herbivorous teeth. It's also notable that, in keeping with the pirate motif, he has several golden teeth and also appears to have some teeth missing, though this may be due to him needing repairs. He also has a hanging jaw; this is also likely due to him needing repairs. His ears are articulated, thus able to move back and forth and left to right. His upper jaw muzzle is speckled on the sides with black dots, indicating freckles or translucent whiskers. It is possible that these whiskers may have simply been removed due to disrepair. In Five Nights at Freddy's: Help Wanted, Foxy's design is altered slightly. His fur color is more desaturated and its texture is more matted and scratchy.

In Five Nights at Freddy's AR: Special Delivery, Foxy's design remains the same as his original; however, for realism purposes, his design receives specular reflection.

As Withered Foxy (Foxy's withered form), he, along with the four other older animatronics, have all fallen into severe disrepair, and he is replaced by his newer counterpart for the "improved" Freddy Fazbear's Pizza due to an attempted retrofit of the older animatronics that took place before they got scrapped for the newer models, such as Mangle.[4] Withered Foxy's suit has become even more tattered and the fur on his left ear has come off completely. A noticeable difference is what seems to be a change of shape of his muzzle. The teeth of his endoskeleton are now clearly visible, this being true with every old animatronic. However, when comparing his appearance and even his voice to Withered Bonnie, Withered Chica, or even his brand new counterpart Mangle, Foxy actually seems to be in better shape, since, just like Withered Freddy, the worst damage he has on him are just some huge rips. Unlike some of the aforementioned animatronics, Foxy is not entirely stripped of his costume, nor is he missing his face or any limbs.

In Five Nights at Freddy's: Help Wanted, Withered Foxy's design remains unchanged for the most part, the most noticeable change being that he has a darker shade of red. 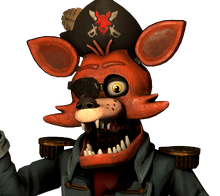 From the Afraid of the Dark: "Captain Foxy's Pirate Adventure" level in Help Wanted's Curse of Dreadbear DLC and Freddy & Friends: On Tour! show, it was revealed that Foxy originally wore his pirate outfit before his discontinuation and was called Captain Foxy.

He wears a blue frock coat with gold accents, a strap around his torso, and a pirate hat to match, befitting his pirate nature.

As the title of Foxy's attraction would imply, Foxy's personality is that of a stereotypical pirate, often speaking in pirate slang, all with a pirate accent. One of his lines also suggests he might be claustrophobic. According to a game over screen in Five Nights at Freddy's: Help Wanted, Foxy is perceptive, and not easily deceived. Based on Freddy Fazbear's description of Foxy in the Freddy Fazbear's Pizza Theme Song, he is implied to be reclusive, based on the fact that Freddy Fazbear sings about Foxy rather than Foxy singing himself, which only helps prove this.

As shown in Curse of Dreadbear, Foxy seems to be aware of his dilapidated look when he warns the player to stay inside the ride. He also threatens the player saying he will send them to "Davy Jones' locker" if they do poorly. His lines also sound as if they were being played over loudspeakers, as opposed to emanating from Foxy himself.

In Five Nights at Freddy's AR: Special Delivery, Foxy acts and speaks in a more aggressive, mocking, and belittling matter, seemingly taking delight in tormenting the player. This shows how much of a sadistic approach he's willing to take.

As Withered Foxy, nothing much is known about his personality. However, Withered Foxy seems to be a more aggressive and malicious version of the original Foxy, evidenced by how Phone Guy mentions that Foxy can get a bit twitchy[5].

He is revealed in Help Wanted to have control fuses in certain parts of his body, which allow his servos to properly function. Without said fuses or with a fuse in the wrong receptacle, he malfunctions.