The forest animatronics are a series of animatronics based around forests, who appear in Five Nights at Freddy's AR: Special Delivery as limited time animatronic skins. They were introduced for the Haunted Forest Event that started on November 12, 2020. 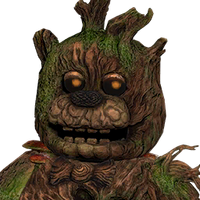 Woodland Toy Freddy is a version of Toy Freddy, and the first forest animatronic skin released on November 12, 2020. He is Toy Freddy's second skin, after VR Toy Freddy in the Arcade Mayhem Event.

Woodland Toy Freddy, being a Toy Freddy skin, is similar. He is made entirely out of wood and is covered in moss. In his head, branches are coming out, replacing his top hat. Woodland Toy Freddy has a large gap within his chest and his limbs are covered in red mushrooms and he holds a large walking stick instead of a microphone. 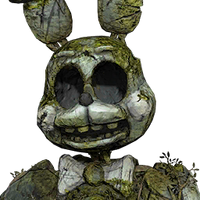 Boulder Toy Bonnie is a version of Toy Bonnie, and the second forest animatronic skin released on November 19, 2020. He is Toy Bonnie's second skin, after System Error Toy Bonnie in the Arcade Mayhem Event.

Boulder Toy Bonnie, being a Toy Bonnie skin, is similar to him. He is made entirely out of rocks and is covered in moss. Boulder Toy Bonnie has no eyesockets, with only hollow holes in their place. He has numerous cracks all over his body and his limbs are covered in branches. His left ear appears to have a chunk taken out of it. 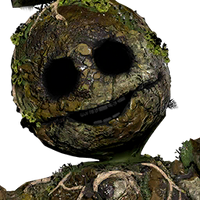 Swamp Balloon Boy, being a Balloon Boy skin, is similar, but is made entirely out of mud. Throughout his body, many roots, vines, leaves and moss are growing out of him. His eyes are empty and his mouth is much smaller, but is now attached to a large crack that goes around his whole head. His balloon now holds the same changes that he has, and his sign, also covered in moss, now reads "ROT" instead of "Balloons!". His hat propeller, instead of being four round flat pieces of plastic, now looks more like a boat propeller.