Due to its success and popularity, the Five Nights at Freddy's franchise gained a colossal number of cameos, references, parodies, and other sources of popular culture.

"Come on down to Freddy Fazbear's Pizza! We've got food and entertainment for the whole family! And you've never seen anything quite like our animatronics. :)"

"Hello. I wanted to jot down a quick message to help you get settled on your first night. I actually worked at the mall before you--it's my last week now."

Freddy Fazbear's profile picture from Emily is Away. 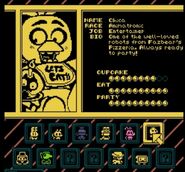 Chica as a duck toy from Bulb Boy.

Freddy found up at the attic from I Love You to Bits.

Chica's cameo in No Delivery.

The "CELEBRATE" poster used in Good Pizza, Great Pizza, as seen from the far left.

Freddy's appearance in Fleeing the Complex.
Add a photo to this gallery

The plushie of Freddy, Bonnie, and Chica from the Steven Universe comic in issue #05.

The animatronic in Turma da Mônica Jovem with an uncanny resemblance to Chica.

The haunted animatronics with resemblance to the classic Five Nights at Freddy's animatronics from Marvel Super Hero Adventures: Captain Marvel - Halloween Spooktacular #1. One of them resembled Montgomery Gator.
Add a photo to this gallery

The "CELEBRATE" poster as seen in the background from Blood Fest.
Add a photo to this gallery

Freddy as a "slime-pooped" toy by The Hangrees.
Add a photo to this gallery

Freddy, Bonnie, and Chica in the sticker for the Steam Summer Sale Sticker Book on Summer 2017.

Freddy's head seen in the Spring Cleaning Event wallpaper on Summer 2019.
Add a photo to this gallery 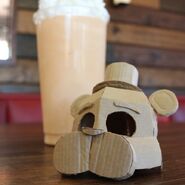 The cardboard-made Freddy mask by Arby's.
Add a photo to this gallery

Retrieved from "https://freddy-fazbears-pizza.fandom.com/wiki/Five_Nights_at_Freddy%27s_in_Popular_Culture?oldid=3325737"
Community content is available under CC-BY-SA unless otherwise noted.