Five Nights at Freddy's Plus

Five Nights at Freddy's Plus

On August 28th, 2020, the name of the game was revealed via a tweet from the game's official Twitter account.[1] After that, on September 12th, 2020, a teaser trailer featuring Bonnie was released. Later that year, on October 31st, the model for Freddy, a poster of him, and a room were revealed. After almost three months of hiatus, on January 19th, 2021, three new teaser trailers, as well as a secret fourth trailer were released, showcasing the new models of Bonnie, Chica, Foxy, and the Puppet (albeit the latter two are to a much lesser extent).

After the mostly positive reception of these teasers, Phisnom tweeted four bonus images on January 23rd, 2021, featuring bobbleheads, plushies, the iconic "Celebrate!" poster of Freddy, Bonnie, and Chica, as well as two clocks made by a company named "Fregdrick's Tools and Timepieces". Five Nights at Freddy's Plus will be the only game in the initiative that will be paid on PC.

On February 4, 2022, Phisnom uploaded his summary and FAQ about Five Nights at Freddy's Plus on Pastebin,[2] revealing some quantity of details for the game:

The first teaser of FNaF Plus. 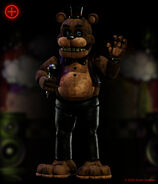 The new design of Freddy.

A teaser of a Hallway.

A showcase of the Supply Closet.

Freddy, Bonnie, and Chica on the celebrate poster. 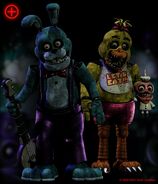 The new design of Bonnie and Chica.

A showcase of the ball pit.

The new design of Foxy. 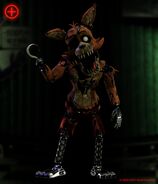 The full design of Foxy.