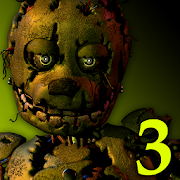 The mobile port of Five Nights at Freddy's 3 was first released for Android on March 7, 2015 and for iOS on March 11, 2015. This port costs $2.99. A mobile demo was released for all Android devices on the Google Play Store. It is the longest of the three mobile demos, with the first three nights being accessible. However, as the first night does not include any animatronics, it is still only two nights of gameplay. A port was also released for devices running the Amazon Fire OS, which cost $2.99 as well.

On February 4, a new remastered edition by Clickteam LLC was released, fixing all the bugs along with having the graphics from the PC Version.

Currently, the game is available on Google Play Store and iTunes.

Springtrap's jumpscare from the left.

Springtrap's jumpscare from the right.

The image of Springtrap when starting up the game.

The right side of The Office on mobile.

The left side of The Office on mobile.

A glitch where Phantom Foxy stands in the office without jumpscaring the player.

New Right Side in Mobile.

New Left Side in Mobile.
Community content is available under CC-BY-SA unless otherwise noted.
Advertisement