Not what you were looking for? See Freddy (disambiguation).
Or were you looking for the mobile version, its home console version, or the troll version?

There are no doors or lights in the third game, and the player must rely on playing audio and sealing off vents to survive, as well as utilizing a Maintenance Panel to reboot any systems which happen to go offline.

Thirty years after Freddy Fazbear's Pizza closed its doors, the events that took place there have become nothing more than a rumor and a childhood memory, but the owners of "Fazbear's Fright: The Horror Attraction" are determined to revive the legend and make the experience as authentic as possible for patrons, going to great lengths to find anything that might have survived decades of neglect and ruin.

At first, there were only empty shells, a hand, a hook, and an old paper-plate doll, but then a remarkable discovery was made...

The attraction now has one animatronic.

On November 16, 2014, before the game's official reveal, Scott's website only displayed the site header and the word "'offline." Brightening the picture shows small text in the bottom left corner of the image saying "until next time." When viewing the image's code, one could find that the alt-text read "soon." This "soon" was removed on December 8, 2014, but was re-added the same day - likely a mistake.

On December 6, 2014, when brightened, Scott's website had a very large number three on the bottom right, hinting at a third installment to the Five Nights at Freddy's series. The same day, however, the large three was removed from the bottom right, leaving only the word "offline." This third image did not include the words "until next time," either.

On December 7, 2014, the 3 was re-added. Furthermore, when viewing the page's source, it displays the keywords of the page as: "five, nights, at, freddys, 30 years later, only one." Earlier versions read "20 years later," and "only one left."

As of December 9th, 2014, the 3 was removed and replaced by a "Merry Christmas!" message below the "offline" text. The page's source has also changed to say "five nights at freddys, taking a break, Merry Christmas everyone! :)". The "soon" alt-text has also been removed again.

On January 3rd, the "offline" image was replaced with a picture of Springtrap's face looking out from the darkness with the accompanying text, "I am still here." When brightened, a tiny gray 3 can be seen in the bottom-right corner. In the source code, there is text that says "I remain" - replacing the previous Christmas message. The source code also reveals that this new image is named "fnaf3.jpg".

On January 14th, the website is updated, revealing a teaser of the animatronics' empty heads, including the paperpal, inside a box. A big, red "3" is seen above them. When the image is brightened, Springtrap is seen standing to the right of the box. The source code still has the "I remain" text, but the image is named "whatcanweuse.jpg".

The game was officially released on March 2, 2015 - first, as a demo given out to Let's Players on Twitch.tv and YouTube, then hours later as a full game available to the public on Steam. An Android version was released on March 7, 2015, followed by an iOS release on March 12, 2015.

There are 4 stars to unlock in the third game:

* Getting the third star unlocks the cheat selection from the Extra menu.

Selecting an option on the main menu.

The music that plays on the main menu screen from the "troll" game.

Five Nights at Freddy's 3 received mixed to positive reviews from professional critics, specifically garnering praise for its darker and grittier tone. At Metacritic, which assigns a rating out of 100 to reviews from mainstream critics, Five Nights at Freddy's 3 has received an average score of 71 out of 100, whereas GameRankings gave the game's PC version a 72.00% based on 4 reviews, and the iOS version an 80%.

Omri Petitte from PC Gamer gave Five Nights at Freddy's 3 a score of 77 out of 100, praising the reworked camera system, but commented on how the jumpscares from the other animatronics "felt a little stale by the third night." In a more critical review, Nic Rowen from Destructoid gave the game a 6.5 out of 10, saying that, even though the game is "by far the most technically proficient and mechanically satisfying installment yet," he criticized Springtrap and Fazbear's Fright for lacking the "charm of the original cast and locations."

A screenshot showcasing the Office.

A screenshot showcasing the system monitor.

A screenshot showcasing Springtrap from the monitor.

A screenshot showcasing Springtrap's jumpscare from the left side.

A screenshot showcasing a blurry camera feed on the monitor.
Add a photo to this gallery

The third game as a part from the Franchise Pack.

On December 6, 2014, Scott Cawthon added this image to his website that, at first glance, appears to be nothing more but a black image that reads "offline" in white text. If adjusted in a photo manipulation program properly, a large, yellow "3" appears in the lower right corner.

"soon" - The word that appeared when checking on the source code.

The "soon" alt text in the split second before the Offline image loads.

"five, nights, at, freddys, 30 years later, only one" - The words that appear when checking the source code.

"Five Nights at Freddy's, taking a break, Merry Christmas everyone! :)"

As of January 2nd, a new image replaced the "offline" screen... (features Springtrap)

...upon brightening the image, a small number "3" appears in the lower right corner.

"I remain" - The words that appear when checking the source code.

Scott's third teaser for FNaF 3. It features the toys, Foxy's hook, and other things into one box.

For a short period of time when the trailer was released, this image replaced the previous teaser on Scott's website. It has since been reverted.

The third teaser, featuring An image of the map for the game that appeared on February 3rd.

A brightened image of Scott's Map. It revealed CAMS 10 to 15.

The fifth teaser on Scott's site, featuring Phantom Balloon Boy. The keyword in the website's code is "Fear".

Ditto. Brightened and saturated for clarity.

The final teaser for the game, featuring Phantom Chica and Phantom Foxy that reads "It's all in your mind".

Freddy's top hat lies alone on the floor, with dim lights shining on it, in this mysterious teaser that Scott posted after FNaF3 was released.

Scott's website updated on April 22nd, without the hat from the previous teaser. Many people thought back then that this was the beginning of Five Nights at Freddy's 4.
Add a photo to this gallery

Scott Cawthon debunking a rumor that the game would be released on February 5th.

Scott jokingly announcing that he was hacked.

Scott stating that he plans to add a fourth star for completing Nightmare with the Aggressive Cheat.
Add a photo to this gallery 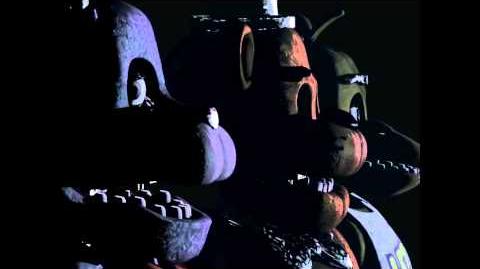