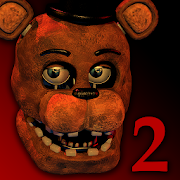 The mobile version of Five Nights at Freddy's 2 is a port released for Android on November 13, 2014 and iOS on November 20, 2014. This port costs $2.99. It was later released for Windows Phone on December 4, 2014. The game also received an Amazon Fire OS Port for $2.99, but suffers more framerate drops than other mobile ports due to the Amazon Store's tighter memory limit. This has been fixed in later ports to Fire OS.

The remastered edition was released on October 29, 2019.

Introduced in the remastered port, the Cheat Mode is available for purchase for $4.99. It gives the player an opportunity of unlimited usage of the Flashlight (which also prevents Balloon Boy from disabling it), faster nights, and a radar map which shows the location of each animatronics more easier.

The image of Withered Freddy Fazbear when starting up the game.

A glitch from one of the Death Minigames on mobile.

The Office with several plushies on mobile.

Toy Bonnie in Party Room 3 without his guitar in the mobile version.