Five Nights at Freddy's: The Ride

Five Nights at Freddy's: The Ride is a proposed dark ride by Sally Corporation. It started development on November 23, 2016. Its opening date has yet to be revealed.

We are a group of 6 security guards in charge of patrolling the Freddy Fazbear's Pizza restaurant. During our shift, we find that we are being stalked by a number of deadly animatronics roaming the building. Our mission is to defend ourselves against the animatronics and try to stay alive until 6 AM in the morning. Our only weapons are our flashlights (which scare the robots away) and buttons on the dashboard of the ride vehicle that give us the ability to shut doors. We are always made aware of the risk of either running low on battery power in our flashlights and having to conserve power so we can operate the doors. Sometimes your team survives ‘till morning, sometimes they get you!

Concept art of William Afton cueing people onto the ride.

Concept art of Springtrap attacking the riders while numerous pizza boxes fall around them.

Concept art of Withered Bonnie attacking the riders by leaping out of a ball pit.

Concept art of Foxy attacking the riders from Pirate Cove.

Concept art of The Puppet attacking the riders by jumping out an arcade cabinet. 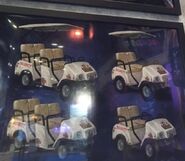 Concept art of the Trams.
Add a photo to this gallery