Five Nights at Freddy's: Security Breach is an upcoming game that is currently under development. First revealed on August 8, 2019 during the franchise's 5th anniversary, it is scheduled to be released sometime around 2020.

Steel Wool Studios confirmed that they started production for their next Five Nights at Freddy's game for a 2020 release.[1][2]

Hey, kids! Do you want pizza?! Well, Fazbear Entertainment has spared no expense developing the world’s most extreme family fun center – Freddy Fazbear’s Mega Pizza Plex! At three stories tall, it’s the flashiest, raddest, rockingist, safest* pizzeria the universe has ever seen. Of course, Freddy and the band are excited to meet you! Utilizing the latest in animatronic technology, you can actually party with the stars themselves. So, on your next birthday, let Freddy Fazbear’s Mega Pizza Plex make you a SUPERSTAR!

With the following reveal of Freddy in Space 2's production, the teaser from Scott's main website, http://scottgames.com, shows off another upcoming game. It shows that the game will be set inside a mall-like building with an 80's-style motif. Freddy Fazbear's Pizza being a restaurant inside the mall. Also included is a laser tag arena, an arcade, and what looks to be a cinema. In the main square of the mall, an animatronic band consisting of new "glamrock" animatronics (Glamrock Chica, Glamrock Freddy, Montgomery Gator, and Roxanne Wolf) play for an excited crowd waving glowsticks. It is entirely possible some of these animatronics are new characters, however.

When looking into source code from the website, a hidden conversation between two characters can be found. It reads as such:

Stay the course.
I will.
Focus on my voice.
I will.
Don't let anyone lead you astray.
I won't.
Have you selected one?
I have.

On September 29, 2019, scottgames.com was updated with a new teaser featuring the new version of what seems to be Freddy Fazbear. While the file is named 7_1.jpg, if the teaser is opened in Notepad, the text "G l a m r o c k _ F r e d _ P o s t e r" can be found. This may imply the new set of animatronics will be known as the glamrock animatronics, with glam rock being a term referring to rock musicians in the 1970s that "wore outrageous costumes, makeup, and hairstyles, particularly platform shoes and glitter." The name found in Notepad also leaves the possibility open that the animatronic featured may be a version of Fredbear instead of Freddy.

On November 5, 2019, the teaser for "Glamrock Fred" was updated. From the image's left side close to "Glamrock Fred's" head, a silhouetted human/rabbit-like figure is silhouetted against the sky. Looking into Notepad, another string of characters can be found reading "S h a d o w o f V a n n y." Given the recent discovery of Reluctant Follower in Five Nights at Freddy's VR: Help Wanted, her relation to the rabbit mask, and the generally feminine figure of the shadow, some believe this to be the Reluctant Follower and that her name is Vanny.

On March 24, 2020, a new teaser is uploaded on scottgames.com. The teaser poster reveals a brand-new animatronic with a design based on an alligator. The file name is referred as "Montgomery.jpg", and when converting the image to metadata, his name is revealed as Glamrock Monty.

On April 21, 2020, the characters' names are leaked from Funko's list of upcoming products, including in a respective order: Glamrock Chica, Glamrock Fred (as Glamrock Freddy), Glamrock Monty (as Montgomery Gator), Roxanne Wolf, and Vanny (as Vannie).

On April 24, 2020, the game's upcoming 2020-2021 calendar is found at Amazon. The cover (although it was subject to change later on) reveals the renders of Montgomery Gator, Glamrock Freddy, and Roxanne Wolf.

On May 5, 2020, scottgames.com is updated with a new teaser, showing off a neon sign with Glamrock Freddy's shape and the revealed title - Five Nights at Freddy's: Security Breach. Behind the franchise's trademark logo from the top are faint glows that somewhat appears to be police LED light bars as indicated by the red, white, and blue tints.

On June 11, 2020, scottgames.com is updated once again. The new teaser reveals a female security guard, who will serve as either the main protagonist of the game or a supporting character. On the same day, Scott confirmed that the game is set to come out around the end of the year.[4]

On August 7, 2020, another new teaser is uploaded to scottgames.com, featuring the full body of the new character and antagonist - Vanny.

On September 16, 2020, the teaser trailer was launched during the PlayStation 5 Showcase event. The video shows a couple of new rooms and inside the mall restaurant, as well as instituting a new animatronic with a grinning crescent moon for a face. At the end, the game was announced to be a Playstation console exclusive for the first three months after its release on PC, Playstation 4, and Playstation 5. While a release date has not been confirmed yet, this would likely mean the game will not come out any earlier than November 12, 2020, the same date as the release of the Playstation 5.

The code found in Notepad for "Glamerock Fred Poster."

The same teaser, but the rabbit-like figure is added in the skylight.

The code found in Notepad for "Shadow of Vanny."

The unreleased teaser of Glamrock Chica.

The unreleased teaser of Roxanne Wolf.
Add a photo to this gallery 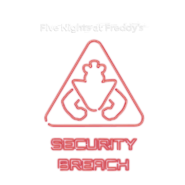 Official logo. [1]
Add a photo to this gallery

Retrieved from "https://freddy-fazbears-pizza.fandom.com/wiki/Five_Nights_at_Freddy%27s:_Security_Breach?oldid=3314609"
Community content is available under CC-BY-SA unless otherwise noted.