Five Nights at Freddy's Wiki
Register
Don't have an account?
Sign In
Advertisement
in: FNAF Articles, Platforms, Mobile,
and 2 more

Not what you were looking for? See Five Nights at Freddy's (disambiguation), or the PC & Console version of the same name. 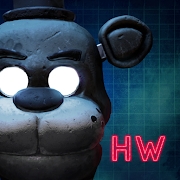 The mobile port of Five Nights at Freddy's: Help Wanted was released on October 26, 2020 by Steel Wool Studios for iOS and Android.

This is the mobile version of Five Nights at Freddy’s: Help Wanted, a collection of classic and original mini-games set in the Five Nights universe.

Survive terrifying encounters with your favorite killer animatronics in a collection of new and classic FIVE NIGHTS AT FREDDY’S™ experiences. “Where fantasy and fun come to life!”

YOU’RE HIRED - Time to get your hands dirty. Repair claustrophobic ventilation systems, troubleshoot broken animatronics that could activate at any moment, or spend your evenings cowering in the nighttime security guard office.

In the initial release, only the following game modes are available:

The following is a list of missing game modes:

A new minigame called Princess Quest is currently exclusive to the mobile port of the game. Occasionally, a grid pattern will appear on objects at the Prize Counter. To unlock Princess Quest (and all currently locked game modes), the player must zoom in on one of these glitching objects. Afterwards, the screen will fade to black and fade back in at the level select with everything unlocked and Princess Quest on the side monitor.