Not what you were looking for? See the Death Coin from the seventh game.

Called Play Tokens in Freddy Fazbear's Pizzeria Simulator, the player gets ten at the start of each day, and keeps the ones that they didn't spend from the previous day. The player can spend one token to "play test" one of the items the player can buy in the Catalog during blueprint mode.

Called Faz-Coins in Ultimate Custom Night, the currency can be collected by hovering the mouse over the randomly appearing coins across the Monitor or, if he's feeling nice, the player can get ten from Rockstar Foxy. The player can also get them if they counter one of the animatronics or use the Death Coin (whenever the player hears the bonk sound effect or clicking on Helpy). These are spent to buy plushies for Circus Baby, Nightmare Bonnie, and Nightmare Mangle to stop them from attacking the player. The player must also spend five Faz-Coins on Rockstar Freddy when he asks for them or else they will be killed. The final use for Faz-Coins is to buy the Death Coin from CAM 07, which will remove one threat from the night.

Faz-Tokens can be found in a multitude of locations in Help Wanted, usually three per setting. While in the main hub of The Freddy Fazbear Virtual Experience, a monitor on the right will keep track of the number of tokens the player has found out of the total of thirty. Collecting these have more effects than just completion as well. The most obvious outcome is unlocking prizes at the Prize Counter for reaching certain thresholds. There are 30 Faz-Tokens to collect during the game. If the player finds a Faz-Token that they already have found, then it will appear translucent blue (except the one found in the Prize Counter, which just disappears). Collecting Faz-Tokens also seems to increase how solid Glitchtrap appears, changing from a transparent green outline to a fully-formed rabbit mascot.

Faz-Tokens unlock prizes found at the Prize Counter under the Special tab. These are as follows:

NOTE: Please be aware that these locations were pulled from various online playthroughs. An update occurred which may have removed some of these locations.

Called Faz-Coins in Five Nights at Freddy's AR: Special Delivery, they can be obtained by watching ads (which rewards the player 10 Faz-Coins), as an Event Present reward (which have a chance of giving 25 Faz-Coins) or directly purchasing them with real money. The amount of Faz-Coins by the consumer's choice can be bought via in-app purchases: 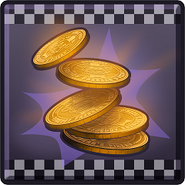 The Faz-Tokens, as they appear on the "Numismatist" achievement. 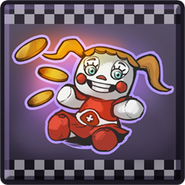 The Faz-Tokens, as they appear on the "Play" achievement. 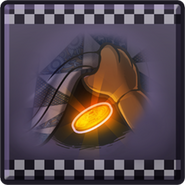 The Faz-Tokens, as they appear on the "Let's Party!" achievement.
Community content is available under CC-BY-SA unless otherwise noted.
Advertisement