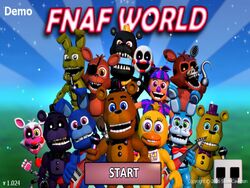 A demo version of FNaF World is available at Game Jolt on January 21, 2016, although it seems odd that the demo still exists despite the fact that the full game is free-to-play.

While the full game is completely updated and improved, the old 8-bit sprites from v1.0-V1.024 still remain in the demo while introducing no features or updates from v1.10-1.24.

At least 16 characters are playable:

Add a photo to this gallery
Retrieved from "https://freddy-fazbears-pizza.fandom.com/wiki/FNaF_World_(Demo)?oldid=3282601"
Community content is available under CC-BY-SA unless otherwise noted.