Were you looking for the original version of the game?

FNaF World: Halloween Edition is a troll game for FNaF World, which was released on October 28, 2015. On the same day, a "hacker" by the name of "lolz_hax" (in which it was actually Scott Cawthon), "hacked" the site fnafworld.com with a message claiming he had gotten the files for FNaF World and would release it that night. Later, the site was updated with a link to a GameJolt page with the download. Once downloaded, it became clear that it was just a joke by Scott as the game turned out to be a reskin of an earlier game by Scott, Fighter Mage Bard. Scott eventually deleted the download link a few hours later.

From the "SELECT YOUR CLASS" menu before starting the game, there are three difficulties to the game, which change the player's character.

There are several items that can be collected throughout the game, some offering boosts and some functioning as skills in battle.

The items listed here function as a single action in battle. There is a limited stock of them in the entire game as they were found within the finite number of treasure chests scattered around the map. The player can only hold a maximum of 30 of each.

The following items all have a passive boost applied to the player. Each one can be found in a shop and costs a certain amount of Gold, which is earned from treasure chests or defeating enemies. Boost items that have been collected can be seen under the status box on the lower left.

Enemies in the game can only be found by walking all around the game. Below are the current enemies up to date:

Purplegeist, the final boss of the game.

Party Hat A, a secret boss.

Party Hat B, a secret boss.
Add a photo to this gallery

As an obvious play on Purple Guy, Replacing Monster from Fighter Mage Bard,Purplegeist serves as the final boss of the game. He has 500 HP, more than any other enemy. It is highly recommended to buy every item possible as he hits hard, and a prolonged fight can make things difficult. The usual strategy is to start the fight with Boost Song/Blind Cake and proceed to do the basic attack until he is poisoned. After that, it's just a matter of using power items (AMP Song/Rock Notes/Boom Cake) and healing items (Heal Song/Faint Notes/Regen Cakes). Upon defeating him, the player is suddenly taken directly to the "The End" screen.

There are also two secret bosses in the form of the Party Hats:

Replacing Bunny from Fighter Mage Bard,The Party Hat A can be found soon after the Poison Sword shop. It exists in a small area on the very bottom-left of the map, in front of the pumpkin that resides there. It has the second highest HP of any enemy in the game and seems to have higher defenses than Purplegeist. Defeating it will power up the Big Shield.

Replacing Greed from Fighter Mage Bard,The Party Hat B resides in the second to last area. It is behind a breakable wall that leads to a short "hallway" ending in two chests and can be encountered at the end of it. Its attack seems to be reliant on the player's max HP, dealing ~90% of it as damage. Party Hat B starts the fight with a priority attack, leaving the player at a small amount of health. For those playing as Freddy, at a high enough level, it can be defeated with just a single AMP Song. For those playing as Chica, it must be blinded first, as it cannot be defeated in a single hit. Defeating it will power up the Katana.

The hard mode "Load Game" button.
Add a photo to this gallery

Texture of the grass. 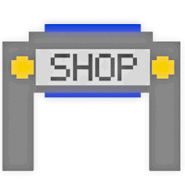 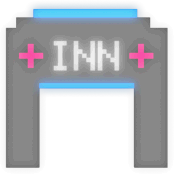 The inn.
Add a photo to this gallery

Texture of some dead grass.
Add a photo to this gallery 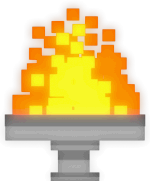 Texture of some muddy grass.
Add a photo to this gallery

The "Game Over" text.

The "Menu" button.
Add a photo to this gallery

The effect of the six basic attacks.

The effect of the Chill Notes attack.

The effect of the Blind Cakes attack.

The sprite displayed upon killing an enemy.

The effect displayed when an attack is blocked.
Add a photo to this gallery

The text displayed upon leveling up.

One of lolz_hax's messages.
Add a photo to this gallery

Retrieved from "https://freddy-fazbears-pizza.fandom.com/wiki/FNaF_World:_Halloween_Edition?oldid=3232793"
Community content is available under CC-BY-SA unless otherwise noted.