Endo-02 is an endoskeleton designed for the withered animatronics and some toy animatronics in Freddy Fazbear's Pizza during the 1980s era. The Five Nights at Freddy's 2 game marked the extra suitless endoskeleton's first debut.

This endoskeleton seems much detailed in appearance when comparing to its another variant Endo-01. Shaded with series of gray and silver colors, it sports with three rib-like cages, cylinder limbs with spiral springs, a wide mouth filled with squarish teeth, and flat, three-toed feet.

Its overall appearance bears a lot of striking similarities to Withered Foxy's endoskeleton due to its nearly identical body structures, with ears in exact same shape but facing in a different way. Endo-02 also has hazel-blue eyes similar to those of Withered Freddy's.

From the second game, its head is designed to feature tiny connective wires, containing wires for inside some parts of the limbs, and a bundle of long wires can be seen sticking out behind its back; apparently identifiable when at the Prize Corner. In Help Wanted, however, these are removed possibly in order to reduce the polycount.

Akin to other endoskeletons, Endo-02 has functional eyelids, joints, jaw, knuckles, and ears (which is not the case for Withered Chica and Toy Chica). They are created as inner skeletons for the older withered animatronic cast at first, and reused for the toy animatronics albeit Balloon Boy, JJ, and the Puppet.

Endo-02 appears to wander the restaurant at rare intervals, but can be encountered as early as Night 1 and onward. It has 1/10 chance to appear in the Prize Corner (CAM 11) and 1/1000 chance to be seen in the Left Air Vent (CAM 05). Endo-02 can be seen at any time, but very rarely, and the chance goes up when the Music Box runs out, before the Puppet leaves the Prize Corner. It will not attack or jumpscare the player.

Endo-02 reappeared in Five Nights at Freddy's VR: Help Wanted and was seen twice. In the FNAF 2 level mode, Endo-02 has a brief role very divergent to its second game appearance, as Endo-02 has a rare chance to appear standing at the right side inside the Office for the whole night. In Mangle's Vent Repair level segment, Endo-02 can occasionally appear under the floor.

From the Curse of Dreadbear DLC, Endo-02's head appeared in the Spooky Mansion level's "Build-A-Mangle" segment where it is randomly used for creating a mangled animatronic entertainer.

Endo-02 from the Prize Corner.

Endo-02 from the Left Air Vent.
Add a photo to this gallery

Endo-02 from the Prize Corner, brightened.
Add a photo to this gallery

Endo-02 standing in the office.

Endo02 PoseForMangle.flv
A video of Endo-02's model positions.
Add a photo to this gallery 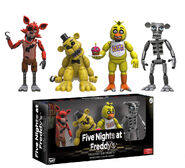 Endo-02 from the collectible figurine Set 1. 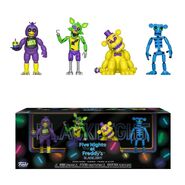 Endo-02 from the collectible figurine Set 1 in Blacklight Edition.

Endo-02 as one of the exclusive MyMojis, as seen in the sticker sheet.
Add a photo to this gallery

Endo-02 in the "Thank You!" image with half of the cast from the first four games of the series.
Add a photo to this gallery

Retrieved from "https://freddy-fazbears-pizza.fandom.com/wiki/Endo-02?oldid=3309759"
Community content is available under CC-BY-SA unless otherwise noted.