Endo-01 is an endoskeleton who is designed as an inner robot "skeleton" to use for the inside of the four original animatronics' suits in Freddy Fazbear's Pizza. Although there is an extra suitless endoskeleton that exists in Five Nights at Freddy's as its first appearance.

Endo-01 is a bipedal humanoid robot composed of thinner pipe-like structures for limbs and stomach. Its flat rectangular head consists of a movable mouth with teeth, and a pair of blue eyeballs.

Its design from the first game is slightly simple, while sporting rectangular cube-shaped fingers and two-toed feet. In the VR game, Endo-01 is tweaked with additional tubes around the head, a series of wiring connecting some parts around both sides, hands and feet (comes with three toes each) made similar to the withered animatronic's endoskeleton, and possesses tiny red lens as seen without eyeballs.

Endo-01 can be found from the Backstage for one of the animatronic characters, which can be seen on the table in the room. On rare occasions, Endo-01 on the table will be seen staring at the surveillance camera with glossy-black eyes, along with the Bonnie head beside it and the other animatronic heads in the room.

Endo-01 reappeared in Five Nights at Freddy's VR: Help Wanted, mostly in the FNAF 1 mode levels where it is found in the Backstage like from the first game.

With almost all of the characters, Endo-01's model can be also viewed in the Gallery mode.

In Five Nights at Freddy's AR: Special Delivery, Endo-01 appears in its first major role as an enemy. It is also the first animatronic ever encountered as a standard enemy, after Freddy and the base form of any collected ones.

Endo-01 is unable to speak or make other noises but footsteps to identify by. As the standard form of the animatronics, Endo-01 can simply be defeated through typical procedures. To locate Endo-01, the player must find the static, use sound to listen to the endoskeleton's movement, examine at the endoskeleton as it rushes, dodge while going haywire, and finally shock the endoskeleton as soon as it uncloaks. Endo-01 does not always go haywire and frequently decloaks at the very first rush. If the player wastes enough time while attempting to shock Endo-01, it will immediately jumpscare, resulting in failure.

Endo-01 can also be obtained for the Workshop at streaks of 1, 5, 9, and 13, then sent to salvage parts or attack other players. The player can also put a plush suit on the endoskeleton.

Endo-01 in the Backstage.

Endo-01 staring at the surveillance camera.
Add a photo to this gallery

Endo-01 in the Backstage, brightened and saturated for clarity.

Endo-01 staring at the camera, brightened and saturated for clarity.
Add a photo to this gallery 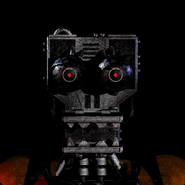 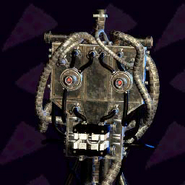 Endo-01's icon in the Gallery.

Endo-01 in the Workshop, animated.
Add a photo to this gallery 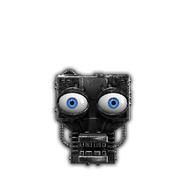 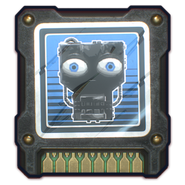 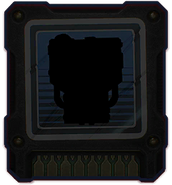 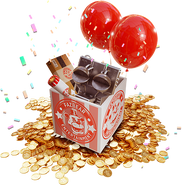 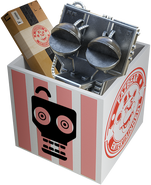 Endo-01 from the Endo Slot banner. 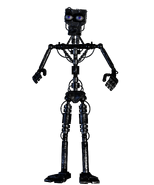 Another 3D Render of Endo 01

Endo-01 in the latest teaser for Five Nights at Freddy's AR: Special Delivery. It is seen at the window from the top left.

Endo-01 in the celebration image for Thanksgiving. 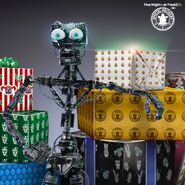 Endo-01 in the celebration image for Happy New Year.
Add a photo to this gallery

Endo-01 in the "Thank You!" image with half of the cast from the first four games.
Add a photo to this gallery

Retrieved from "https://freddy-fazbears-pizza.fandom.com/wiki/Endo-01?oldid=3281700"
Community content is available under CC-BY-SA unless otherwise noted.