Were you looking for the endings in FNaF World?

All of the games in the Five Nights at Freddy's series end in one way or another. Many games involve more than one possible ending depending on the player's actions.

There are 3 endings that the player can achieve in Five Nights at Freddy's. They can be achieved by completing Night 5, Night 6, and Custom Night respectively.

Upon completing Night 5, Mike Schmidt receives his paycheck for $120, and a message from Fazbear Entertainment saying "Good job, sport! See you next week!".

Upon completing Night 6, Mike Schmidt receives an additional 50 cents as an overtime bonus and another "Good job, sport!" message from Fazbear Entertainment.

Upon completing Custom Night, Mike Schmidt receives a pink slip of termination stating that he's fired for tampering with the animatronics, general unprofessionalism, and having an odor.

Three endings can be achieved by the player in Five Nights at Freddy's 2. These endings are very similar to the endings in FNaF, as they can also be achieved by completing Night 5, Night 6, and Custom Night respectively.

Upon completing Night 5, Jeremy Fitzgerald receives his paycheck for $100.50.

Upon completing Night 6, Jeremy Fitzgerald receives an additional $20.10 as an overtime bonus, attached to a newspaper article saying that Freddy Fazbear's Pizza is closing down.

Upon completing Custom Night, Fritz Smith receives a pink slip of termination stating that he's fired for tampering with the animatronics and having an odor. The pink slip also has a comment berating Fritz for getting fired on his first night on the job.

There are 3 endings available in Five Nights at Freddy's 3. Unlike the first and second game which require the player to complete certain levels to achieve the endings, some of the endings can be achieved by completing different hidden objectives throughout the game. 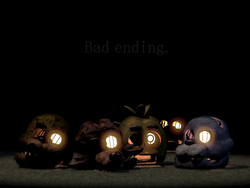 If the player progresses through the game normally, then after the Night 5 minigame ends, the player will be taken to a screen featuring the illuminated heads of Freddy Fazbear, Foxy, Chica and Bonnie (in that order) lying on the floor, symbolizing that the souls of William Afton's victims are still trapped inside the animatronic suits. A fifth head can be seen silhouetted in the background, which is widely speculated to be Golden Freddy's head.

To achieve the Good Ending, the player must get the cake ending for the following minigames:

If the player has gotten the Cake Endings of the secret minigames, then after the Night 5 minigame ends, the player will be taken to a screen similar to the one from the Bad Ending, but this time the animatronic heads are empty, symbolizing that the souls of William Afton's victims have been freed. The fifth head from the Bad Ending is nowhere to be seen, even if the player brightens the image. It should be noted that the positions of the animatronics heads match the gravestones in the lore keeper ending in Freddy Fazbear's Pizzeria Simulator, heavily implying those are the name of the souls that inhabit the animatronics.

Upon completing Night 6 (aka Nightmare), a newspaper will be shown, stating that Fazbear's Fright has burned down. If the player brightens the image of the newspaper, then Springtrap will be seen behind the Freddy Fazbear minifigure, revealing that he survived the fire.

The endings of Five Nights at Freddy's 4 have returned to the tradition of three previous games, having 3 endings which require the player to complete Night 5, Night 6, and Nightmare.

After completing Night 5, a minigame cutscene will play. It is the Crying Child's birthday party, and he is shown getting picked up by his older brother (the kid wearing the Foxy mask from the Night 1 and Night 3 minigames) and the brother's friends (who are wearing Freddy, Bonnie and Chica masks respectively), and thrown into Fredbear's mouth, in an incident known as "The Bite of '83".

After completing Night 6, a minigame cutscene will play. This time, the crying child is shown in darkness with his Plushies in front of him. The child's big brother asks if he can hear him, then proceeds to apologize to him for throwing him into Fredbear's mouth. After that, the Fredbear plush speaks to the child, asking if he still believes that he, along with the rest of the plushies, are his friends, and saying that he will "put him back together". As he speaks, the plushies disappear one by one until only the child is left, who proceeds to cry as a flatline beep is heard in the background, implying that he is dead.

After completing Nightmare/Night 7, the player will be taken to a grey box with locks on it. The player can click on the locks, but the box cannot be opened in any possible way. Then, a message appears, saying "Perhaps some things are best left forgotten, for now".

There are 3 endings to Five Nights at Freddy's: Sister Location. They can be achieved by completing certain tasks; such as following Circus Baby's instructions on last night, finding the Private Room, and completing the Custom Night.

If the player has gotten the secret ending to the death minigame, then they will be granted access to the Private Room, where they must survive against Ennard, classic FNaF style (Surviving until 6AM while sitting in the Private Room office). Upon reaching 6AM, Michael returns home to watch the season finale of The Immortal and the Restless. After the episode ends, Ennard appears, dragging himself across the room. During this sequence, the basket of Exotic Butters can be seen on top of the TV.

Upon completion of a Custom Night preset on Very Hard difficulty, the player will experience a minigame cutscene. The cutscenes detail Michael's body being worn by Ennard slowly deteriorating until he turns purple in the penultimate cutscene, in which he regurgitates Ennard into the sewers before collapsing on the ground. Then, after Circus Baby says "You won't die" repeatedly, Michael gets back up on his feet. After completing Golden Freddy mode on Very Hard difficulty, the player will be treated to a cutscene in which Michael speaks to his father, William Afton (who is still inside of Springtrap) whilst the remains of Fazbear's Fright after burning down can be seen. Once Michael's dialogue ends, Springtrap appears, after which the cutscene ends.

There are 5 endings of Freddy Fazbear's Pizzeria Simulator. They can be achieved by completing certain tasks; completing the game without either salvaging the animatronics or earning any Faz-Score, wasting all the money, obtaining the Egg Baby then check the blueprints on the monitor screen, receiving 10 or more lawsuits without running out of the money, and literally doing all the works within the restaurant.

If the player beats the game without Salvaging any of the animatronics, or with a Faz-Score rating of 0, the player will receive a message from Cassette Man stating that they're fired for not completing Paragraph 4 as per their job, after which they receive a Certificate of Mediocrity.

If the player ends up with a negative amount of money due to a lawsuit, then Tutorial Unit reprimands them for their actions, after which they receive a Certificate of Bankruptcy.

If the player buys the Egg Baby, then touches the blue button near the monitor, and turns it on and off, they will be treated to dialogue in which Henry discusses William Afton's actions while the player sees blueprints on the monitor screen, after which they receive a Certificate of Insanity.

If the player gets a risk of 50 or higher, Tutorial Unit will reprimand them for their actions, after which they receive a Certificate that states they have been Blacklisted.

If the player salvages all of the animatronics, then after beating Saturday, Henry reveals that Freddy Fazbear's Pizza Place was created as a trap for the haunted animatronics, and even addresses Elizabeth Afton (whose soul possesses Scrap Baby) and his daughter (whose soul possesses The Puppet, who is trapped inside of Lefty) during his speech. While he is talking, a fire is started, which burns down the place, as well as destroying the animatronics and freeing the souls once trapped inside them. After which Tutorial Unit congratulates the player on their work, after which they receive a Certificate of Completion.

If the player sets Old Man Consequences to level 1 and leaves all other characters at zero, then once they catch a fish, the player will be taken to the fourth sub-tunnel area from FNaF World, where Old Man Consequence will tell the player to rest their soul and to "leave the demon to his demons". The player's only option from this point is to drown in the lake by repeatedly mashing A and D, after which the game closes.

Once the player has seen all of the A Journey of Revenge and Toy Chica: The High School Years cutscenes and achieves a score of 9800, then the last cutscene they experience will be a cutscene of Golden Freddy in his original Five Nights at Freddy's appearance, twitching and fading into darkness.

There are 3 endings to Five Nights at Freddy's VR: Help Wanted, plus 1 in the Curse of Dreadbear DLC and 1 in the mobile port. They can be achieved by completing certain tasks: Clearing the game by proceeding through Pizza Party, collecting all 16 tapes then failing to do what it told, and having all 16 tapes collected then actually doing what it told.

Upon completing all other levels in the game, Pizza Party will become available. The player is tasked with navigating a maze of rooms to find the titular Pizza Party. In the end, they will enter a room full of cake, pizza, animatronics, and a tape. Glitchtrap will then appear and gesture for the player to follow it behind a curtain. After doing so, the player will be on a stage while a show starts, implying they "became" an animatronic. The credits roll, after which HandUnit tells the player there's nothing more to find, thanks to them for playing before taking them back to the title screen. Whilst this is all happening, Glitchtrap can be seen dancing in the background in an almost gleeful and somewhat unhinged manner.

Finding the 16th tape reveals how to destroy Glitchtrap. The tape states:

"Let it approach you. Let it begin to merge with you. Play the music and flip the switch that will cause a hard restart of the game and flush the memory, effectively killing it. I hope."

The game will then continue. Randomly when loading into the main area, Glitchtrap will appear behind the main computer and will start to "merge" with the player. If the instructions from tape 16 are not followed, the player's view will slowly fade to purple and glitch before fading back into the perspective of Glitchtrap. The implication is that the merge was successful and Glitchtrap can escape from the game. The game will then fade to black and take the player to the game over room.

If the player follows the instructions from Tape 16, they will be taken to a room with only a giant door with handprints and scratches all over it. If the player interacts with a sliding hole in the door, Glitchtrap will appear on the other side. He then shushes the player before backing up into the darkness behind him. After this, the player is returned to the hub where a plush of Glitchtrap will be sitting on the floor next to them.

If the player takes all 4 keys in the Corn Maze minigame and goes back to the basement door at the begin of the maze, they win the minigame in a different room than the others, and with a rabbit mask on the table in front of them.

If the player reaches the end of the Princess Quest minigame and lights the final torch, Glitchtrap in a distorted form will appear in front of the player, saying what has been decoded as "I always come back. Let me out.", and send the player back to the main area.