Were you looking for Ella from the Fazbear Frights universe?

Charlotte Emily (with the illusion disc)

Ella is an animatronic doll, and was one of the three toys that was built by Henry for his daughter, Charlotte Emily.

The Freddy Files Description: Ella was built to match Charlie's size as a small child. When the wheel at the foot of Charlie's bed is turned, Ella exits her mini-closet, holding up a cup for a tea party. Since Ella spent her years of neglect inside her closet, she is the most intact of the animatronics, with her fancy dress almost as crisp as the day Charlie left Hurricane.

Ella is a child-sized animatronic doll who wears a dark starched plaid dress and patent leather shoes. Ella holds a teacup and saucer in her tiny hands like an offering. In TTO and TFC however, she holds a tea tray. Ella has shiny brown synthetic hair and wide eyes. Since Ella is mostly inside in her closet, she is the most intact out of Charlie's toys. When her illusion disc is turned on, it reveals Charlie as a toddler with frizzy brown hair and a round face set in a happy smile, with her chubby hands carrying the tea tray.

In The Freddy Files, Ella has a light blue hat with a wide brim rimmed with pink ruffles and has two pink bows on her hair. She wears a light blue dress, with a big pink bow around the waist. She has brown hair, rosy cheeks, pink lips, and blue eyes. She wears dark leather shoes with white socks, a pink bow on the sides, and four light blue wheels.

She was one of the first toys that Henry invented for his daughter Charlie. After he committed suicide, Charlie left Hurricane with her Aunt Jen and all his toys, including Ella, stayed at her father's house.

After ten years, Charlie returns to Hurricane to attend the launch of a scholarship dedicated to her old friend Michael Brooks and the first thing she does is visit the old house of his father. There she finds Ella along with her other toys, which had remained in her closet for all those years. Charlie notes that she wore an identical outfit same as Ella, back when she and Ella were the same height.[1] Later, Charlie left the house because she did not feel comfortable being there.

She reappears later when Charlie and John return to the house, but it is never taken out of there.

A year later, just before Charlie’s college classes began, she went to her father's house (which was damaged by a heavy storm). Charlie thought of taking Ella and Stanley with her but chose to take Theodore since both toys are bolted to the floor.

Ella later appears when Charlie returned to her father's house for the second time with John. Ella appeared not to be damaged by the storm. John then finds a photo of Charlie when she used to be the same height as Ella.

While discussing Charlie's strange behavior, Clay tells John that he kept Ella after the doll turned up in the rubble of Charlie's old house. He tells him that Charlie wasn’t interested in keeping Ella, which John has a hard time believing since Charlie has a deep love for her father, who made that doll for her.

In Chapter 6, after John arrives at his apartment with Jessica to hide Charlie from Baby, John realizes that Ella might help him with the pictures with "maximum range" that Clay gave him at the hospital. He leaves Jessica with Charlie and drives to Clay's house. He sneaks inside and finds Ella undisturbed from the mess Baby made. John starts rummaging around Clay’s office and finds an illusion disc. He approaches Ella and flicks the switch on the disk, revealing a three-year-old little girl who took her place. He then takes Ella with him. John later shows Ella's disc form to Charlie. Charlie takes a closer look at the illusion disc and tells John that the disc does not have "Afton Robotics" written on it, unlike the other discs.

In Chapter 11, as Charlie and John are opening boxes at Aunt Jen's house to help them understand the situation that they're going through, Charlie finds a lockbox, revealing multiple blueprints of Ella that Henry drew. With the measurements given by the blueprints, they found out that there were different versions of Ella.

Later, as Baby, now revealed as Elizabeth Afton, was slowly confronting Charlie with the truth of who they really are, it's revealed in a memory that Henry cried, bled, and sweat into an Ella rag doll for two months, pouring his agony into the doll, bringing it to life.[2] Henry loses his mind and began to believe Ella was his late daughter (Sammy being murdered by William Afton was a false memory.) Since Henry believed that the doll had Charlie's soul, he created four animatronic dolls based on the Ella doll to recreate Charlie's stages of life (toddler, child, teen, adult.) Elizabeth tells Charlie that each robot was built with a different emotion. Ella, the littlest Charlotte, was built with sadness, which resulted in her crying all the time. The second Charlotte was made by Henry’s madness, the third Charlotte (the main protagonist) was made with Henry's regret and confusion, and the fourth Charlotte was made with Henry’s rage. The fourth Charlotte, which was unfinished, was stolen by William and repurposed as Baby, who would be ultimately be possessed by Elizabeth. 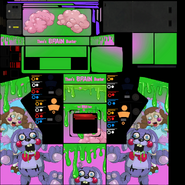 John holding a photo of Charlie dressed as Ella. 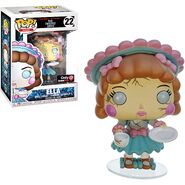 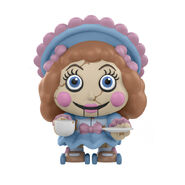 Ella as a mystery mini.