Not what you were looking for? See Afton (disambiguation).

Elizabeth Afton was the daughter of William Afton and sister of Michael Afton and the Crying Child. First appearing in Sister Location, she is the one possessing Circus Baby.

In the Sister Location death minigame, she wears a pink shirt with two black buttons, a red bow in her hair, wears a blue skirt, and black shoes. She also has ginger/blonde hair and bright green eyes.

Elizabeth appears to be innocent and have an apparent fascination with the animatronics, most notably Circus Baby. She has a child-like mentality, marveling at Baby's ability to make ice cream and balloons. She also portrays a pushy and spoiled nature, repeatedly asking her father to let her see Circus Baby by using the excuse that the machine was seemingly made in her honor. Elizabeth is also shown to be disobedient, as she disregarded her father's commands and went close to Baby without his knowledge, which resulted in her tragic death and the cancellation of the pizzeria's grand opening.

As Circus Baby, her mind was warped to the point she believed herself to actually be the animatronic that killed her, and she displayed a malicious nature reminiscent of her father William and her brother Michael when he was younger. 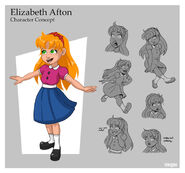