The Elevator is the starting location, excluding Night 4, in Circus Baby's Entertainment and Rental in Five Nights at Freddy's: Sister Location.

The elevator is a circular room with reflective metal walls covered in pipework, and only one visible door. The ceiling contains a large fan with a light behind it that casts a rotating shadow on the walls and grated floor. There are two windows, one on each side, that are the same size and at the same place on the walls. Lights and pipes can be seen outside.

There is a speaker on the left side of the door, as well as a red button, keypad, and vent on the right. There is a poster of Circus Baby with a Bidybab poking out from behind her on the left, displaying a text above her saying "CELEBRATE!." There is also a poster of Ballora on the right, higher up, displaying text below her saying "DANCE!". Opposite of the Baby poster is what appears to be a set of switches.

Error text when attempting to type something in.

The texture of the lights, as seen from the elevator.

The background of the elevator upon arrival at the entrance. 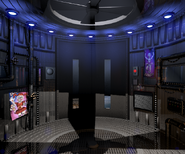 The Elevator in the Extras.