Not what you were looking for? See the FNaF World characters: Chipper's Revenge, Mr. Chipper, or Auto Chipper.

El Chip is a beaver animatronic modeled after the rockstar animatronics with dark brown colors, and a lighter orange/tan color for the muzzle, toes, knees, eyebrows, belly plate, and the ear insides. He has lime-green eyes, two pair of buck teeth, a black nose, rosy reddish-orange cheeks and eyelids, small round ears, and a broad flat tail.

For Hispanic styles, El Chip plays a mandolin and wears a large yellow/red triangle-patterned sombrero with two yellow straps on the center cone and decorated around with small pearl-shaped light-bulbs.

He is one of the purchasable products the player can use for customizing Freddy Fazbear's Pizza Place. El Chip is labelled in the "Rare Finds Auction" from the Catalog. Classified as a "Mid-Size Animatronic" and in "Very Good" item condition, El Chip is worth $32,000. His stats are as follows:

To unlock the "Posh Pizzeria" achievement badge, the player must buy El Chip along with Music Man and Funtime Chica for the stage.

Though while El Chip does not really physically appear in the night to jumpscare or attack the player, he only appears in his various restaurant advertisement pop-ups as a distraction. When his advertisement image comes up, there are two simple ways to get rid of it quickly before going back focusing on gameplay; Click the "SKIP" button or press the ENTER key.

The time limit for each advertisement pop-ups only last 7 seconds. However, if allowing the advertisement to end without getting rid of it in quicker time by the player's own, the player has an occasion chance of having one of the animatronics to attack for ending their night or delivering higher risk.

The challenges in which El Chip is present are as follows:

While he never made a physical appearance in the virtual-reality game, El Chip's name is mentioned in one of the snacks to obtain within the Prize Counter; "El Chip's Tortilla Chips" along with its "Bold and Spicy" flavor.

El Chip on the stage (animated).
Add a photo to this gallery 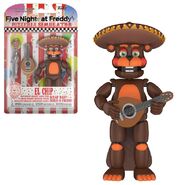 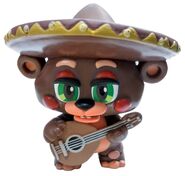 El Chip's mystery mini.
Add a photo to this gallery

Retrieved from "https://freddy-fazbears-pizza.fandom.com/wiki/El_Chip?oldid=3267445"
Community content is available under CC-BY-SA unless otherwise noted.