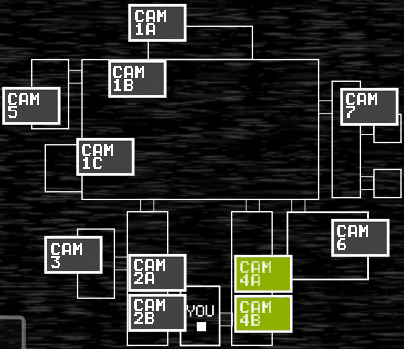 The East Hall is a location in Five Nights at Freddy's within Freddy Fazbear's Pizza. It is viewed with CAM 4A and CAM 4B. Chica often stalks these halls as she approaches the player's position. Freddy Fazbear will show up here on later nights as well.

The poster listing the rules of the restaurant, which can be seen on CAM 4B, occasionally changes into newspaper clippings about The Missing Children Incident that occurred at Freddy Fazbear's Pizza.

Chica commonly comes through this area. Activating the Hall Light when she is in the player's blind spot will show Chica standing behind the window. She can be seen standing at the end of the hall, although she will occasionally move closer up, mouth agape. She will also appear at the corner right next to The Office.

Once Freddy becomes active, he may also enter the hall. He can also appear in the corner, looking directly into the camera. If this happens, he is one step away from attacking, as he skips the Hall Light blind spot and moves directly into The Office. Viewing Freddy on the East Hall Corner camera will prevent him from moving. Changing to another camera will allow him to enter the office, thus killing the player. It is best to close the right door when trying to view another camera. Not having the monitor up at all also prevents Freddy from entering the office.

It is interesting to note that on Night 4 and beyond (as well as on the Custom Night), when Chica is occupying the corner, her head will twitch and snap, and a sound byte also used in the Visual Hallucinations will accompany her. The same applies for Bonnie in the West Hall Corner. This can be beneficial to the player since the sound byte will emit without having to view her on the Monitor, or even if they don't have the Monitor up at all, for that matter, similarly to when she is in the Kitchen. If the sound byte plays alone, without any Hallucinations accompanying it, the player automatically knows that either she and/or Bonnie are in their corners, eliminating the need to check them. The player will need to check them in the mobile version since this audio file is not present.

The East Hall is a dark hallway, barely illuminated by a single light, with the floor almost entirely hidden from the player's view. Star decorations and wires hang from the ceiling. On the wall are three cheerful posters of the animatronic characters.

In the end corner, the floor is shown and is the same bluish and black tile as the corresponding room in the West Hall and in the Dining Area. On the floor, papers lay scattered about. On the walls, papers with writing on them, as well as a poster outlining the rules of the establishment, are hung. There is also a black and white checkered stripe with a red outline on the wall, and the rest of the wall is a grayish color.

Close-up of Chica in CAM 4A.

Chica standing at the corner.

Chica staring into CAM 4B as her head twitches.

Chica twitching in the East Hall (click to animate).

Freddy coming down the East Hall.

Freddy staring into CAM 4B.

CAM 4A, brightened and saturated for clarity.

Chica close to CAM 4A, brightened.

Chica in the corner, brightened.

Chica as her head twitches, brightened.

Freddy in the East Hall, brightened.

Freddy in the corner, brightened.

The fourth news article, brightened.
Add a photo to this gallery

All four newspaper clippings, with transcribed text for easier reading. (Open in new tab to read.)

In the Five Nights at Freddy's Gameplay video uploaded on Scott's YouTube channel, the East Hall and Backstage shared a name, though this was most likely an error at the time.
Add a photo to this gallery
Retrieved from "https://freddy-fazbears-pizza.fandom.com/wiki/East_Hall?oldid=3264411"
Community content is available under CC-BY-SA unless otherwise noted.