The dream cutscenes, also known as end-of-night hallucinations,[1] are cinematics that were shown in Five Nights at Freddy's 2. Upon entering the game for the first time and after beating the levels (from Night 2 to 4), the post-cutscenes will display, taking place in a series of dreams.[2]

The player looks out in front of them, through the eyes of Freddy in almost the same style to wearing the mask, inside Freddy Fazbear's Pizza from the first game. What the player sees from their point-of-view was the Dining Area, with creepy children laughter heard out of nowhere. The player can move their mouse to the left and right sides of the screen to pan; panning left brings Chica into view, and panning right brings Bonnie into view. After a while, the screen flickers and cuts out in a way similar to that of the death minigames, before finally going black with the word "err" in the top left corner. There is a chance that a sound akin to a mixture of radio static and the Freddy Fazbear Head's sound will play while showing a half-lighted Freddy head.

Upon completing the night, another cutscene will occur, with both Bonnie and Chica looking straight at the player. It will eventually end with a black screen, but this time the words "it's me" will appear in the top left corner, a phrase commonly associated with the Five Nights at Freddy's franchise.

Upon completing Night 3, the player once again returns to the Show Stage from the first game, only this time both Bonnie and Chica are standing closer to the player and giving them angry glares with their hollowed-out eyes. As the player returns to default view, they find Golden Freddy is directly in front of them. When the cutscene suddenly ends, the words "it's me" can be seen in the top left corner, similar to Night 2's cutscene.

This time the scene is the same as the one that appears after starting up the game for the first time, with Bonnie and Chica looking out in front of them. However, the Puppet will appear at the beginning of the cutscene, and will stay in that position in the player's field of vision no matter which way they turn. As the cutscene ends, the words "it's me" are seen, similar to Night 2 and Night 3. There are no more cutscenes after this night.

The Dining Area as a background.

Texture of Bonnie in the cutscene.

Ditto but looking at the night guard in the cutscene.

Ditto but staring at the player in the cutscene, with no eyes.

Texture of Chica in the cutscene.

Ditto but looking at the player in the cutscene.

Ditto but staring at the player in the cutscene, with no eyes. 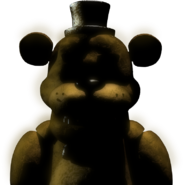 Texture of Golden Freddy in his original form from the post-Night 3 cutscene.

The Puppet from the post-Night 4 cutscene.

FNAF 2 - All Cutscenes Nights 1-5
All cutscenes