Not what you were looking for? See the original Dark Circus Event.

Dark Circus: Encore! is a mixed-reality themed game mode and DLC introduced on December 13, 2021 for Five Nights at Freddy's AR: Special Delivery. It is considered "Episode 1" of the game's "Episodic Content".

A new game mode based around the Dark Circus is featured, costing $19.99 (formerly $12.99) to purchase. The player is sent into a mixed-reality environment where they can freely move around the area by tapping on their screen to move forward. The player is tasked with solving puzzles while on a time limit. Machines with clocks ticking down are strewn throughout the circus, with the players having to search around for clues to solve them. As more tasks are completed, the chained up animatronics are slowly unbound, leading to battles against them in the traditional AR style. Unlike in regular gameplay, failing a puzzle or encounter will respawn the player to right before that particular puzzle or encounter, offering them another chance to complete it successfully.

While Magician Mangle and Clown Springtrap only appear in pictures and memorabilia scattered around the area, Ringmaster Foxy, Ballora, and the Minireenas all return. The heads of Freddy, Chica, Circus Baby, and Toy Bonnie decorated in clown make-up can be seen as well. Inactive Endo-01 endoskeletons can also be spotted. Great Escape Golden Freddy is also introduced as a skin exclusively obtained through completing the DLC.

There are two forms of puzzles; number combinations and matching wires. Submitting an incorrect answer on the puzzles or running out of time on them will result in a jumpscare from Ballora. The puzzles themselves are randomized in each subsequent playthrough.

Some machines require a number code to be activated. These numbers can be found either through pieces of paper or magician's cards hidden in the area. There are one to four numbers in the various combinations. The dial has three different formats for putting in the numbers; basic arrow buttons, a safe dial or a D-Pad.

Some machines require them to be rewired, matching the wires to the plugs based on a color/symbol. The correct order can be found painted either onto bowling pins and crates hidden throughout the circus, and occasionally inside the cannon. Symbols used include a red heart, orange lightning bolt, yellow star, green dot with hole, blue upside-down tear drop, light-blue diamond, purple pentagon and white triangle.

The battles remain the same mechanic-wise as in the regular game, except in a mixed-reality environment. There is also an animated cutscene of the animatronic attacking the player before the battle starts.

Ringmaster Foxy gets the first hit, using his signature whip. Following the same rules as the regular Foxy, Ringmaster Foxy speaks to the player and haywires frequently. He will consistently either decloak himself for a brief glimpse, or walk around the player and stalk them. The player must stay alert and track his movements until he finally decides to charge, giving the player the opportunity to shock and defeat him.

After Ringmaster Foxy is defeated, he will be deactivated when the player returns. The final puzzle is behind his booth, and can now be interacted with. Ballora will be released once its solved. Ballora crawls towards the player and leaps up to pounce on them. Her location can be tracked by the proximity of her music. The player must also be careful not to make noise and attract attentions to themselves. Minireenas will crawl onto the player's screen and must be shaken off quietly. Once three Minireenas are collected, Ballora will charge at the player again, only to be shocked automatically. 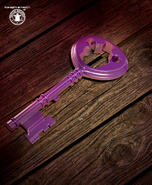 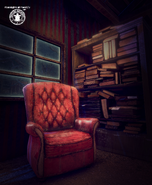 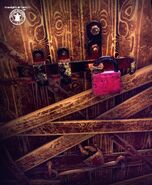 For our most terrifying act yet--
First static teaser.