Danger! Keep Out! is a third and final game mode released with the Curse of Dreadbear DLC for Five Nights at Freddy's: Help Wanted. This game mode plays similar to a standard FNAF 1 level, with some twists.

The player is stationed in a variation of the Office from Five Nights at Freddy's. The player has access to the same camera system, buttons that flash lights on the camera and outside the office doors, and a switch that will shut off the power to the building for a short time while the power level recharges. The main difference is that the doors are no longer able to be closed and the doorways are boarded up.

Jack-O-Chica and Jack-O-Bonnie roam the halls of the restaurant and will approach the office in the same manner as their original counterparts. Upon reaching the office, they will begin breaking the boards keeping them out. After a few hits, the boards will break and the player will be attacked. To prevent this, the player must use the buttons to flash the animatronics, whether on camera or outside the office. This will cause them to disappear and reappear elsewhere. Each flash will drain 20% of the remaining power, meaning the player can only use five flashes before having to reset. As usual, the player must survive until 6 AM.

Grimm Foxy is now active, functioning similarly to Foxy. He will occasionally peek out of the curtain in Pirate's Cove before moving closer to the camera. If he is completely visible, the player must use the Light button on the cameras to reset him. Rebooting the power also seems to take longer than during Night 1.

Dreadbear is now active. He will start on the stage and approach the office in a similar path as Freddy Fazbear would in FNAF 1. He is very slow and loud footsteps can be heard when he is near the player. Unlike the other animatronics, flashing him does not reset his position and merely stuns him for a short amount of time. The player must keep tabs on him using the cameras and flash him to slow down his approach. If the player hears a lightbulb shatter, this indicates that Dreadbear has entered the East Hall. 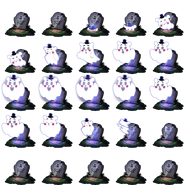 The animation cycle of Helpy in the minigames select.
Community content is available under CC-BY-SA unless otherwise noted.
Advertisement