Five Nights at Freddy's Wiki
Register
Don't have an account?
Sign In
Advertisement
in: FNAF Articles, Articles with Maintenance Issues, Pages with Empty Sections,
and 3 more

Not what you were looking for? See Music Man (disambiguation).

DJ Music Man, referred to as DJMM in-game, is a giant animatronic that appears in Five Nights at Freddy's: Security Breach as a minor antagonist.

DJ Music Man is drastically different compared to his original counterpart in Freddy Fazbear's Pizzeria Simulator. His whole body structure has been completely revamped, now much more reminiscent to a spider than his previous counterpart. His textures on his face are also changed, with his eyebrows and cheeks being a light blue instead of purple and pink. He seems to lack the pink stripes on the sides of his face, and instead of two pink spots on his chin he has a single light blue stripe. His upper row of teeth have some black teeth or chips evoking the appearance of a keyboard. Instead of his signature cymbals, he wears red and yellow headphones on his head. DJ Music Man's black hat also has a yellow stripe instead of a white one. DJ Music Man walks on all six of his limbs, which all have the white gloves the regular Music Man has on his hands. Upon closer inspection, a bow tie is visible on his neck, with button-like objects below it.

DJ Music Man is the DJ of the west arcade in his ballroom, performing music in his DJ booth for the kids who visit there. When Gregory activates the safety protocols in the bathroom, he will enter bouncer mode and attempt to grab Gregory with his large hands. After that he will climb through the walls to grab him. When Gregory pulls the last lever in a long hallway, he will pop in a hole and a chase sequence will begin and he chase him down by stomping, the only way to survive him is to outrun him. When Gregory manages to successfully get to the security office, he will be no longer seen and will have presumably gone back to his DJ booth in the ballroom.

DJ Music Man is described by Glamrock Freddy as a "nice fellow" before entering his main ballroom.[1] Upon activating and leaving his DJ booth, he is shown to favor the walls over walking on the floor, presumably to prevent property damage. However, DJ Music Man is shown to be persistent as he sticks his hand into the arcade bathrooms instead of waiting for Gregory to leave. He is shown to dismiss all aggressive tendencies while manning the DJ booth, ceasing all aggressive behavior against Gregory, despite chasing him moments prior.

DJ Music Man is found sleeping on his stage in the West Arcade. Once Gregory starts the safety protocols and pulls the lever in the bathroom, DJ Music Man will wake up and attempt to stick his hand in the bathroom attempting to grab and catch Gregory. He will later be seen on the walls and ceiling, crawling through big holes around the area to get to Gregory. In a long hallway filled with arcade machines, Gregory pulls the last lever and DJ Music Man can be seen peeking through the hole. He then crawls out to chase Gregory one final time. He will throw arcade machines to stop Gregory so he can catch him. Gregory must get to the office to avoid him. From then on, should the player choose to return, DJ Music Man will be seen manning the DJ booth, with seemingly no hint of malice, regardless of how close Gregory is to him.

DJ Music Man crawling from the end of the third episode of Freddy & Friends: On Tour!, animated.

DJ Music Man crawling towards Gregory as seen in the final trailer, animated. 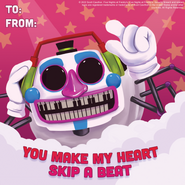 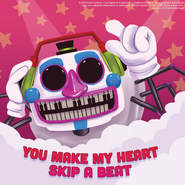 Ditto, without to and from text