The control module animatronics are miniature bots seen in Circus Baby's Entertainment and Rental from Five Nights at Freddy's: Sister Location, and are located in the Primary Control Module and Circus Control. With the only exception of the animatronic human heads, it is unknown if the rest are fully-functional animatronics or just toys.[1] 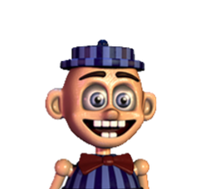 Little Joe as a marionette-like toy and first appeared in Sister Location as one of the props for the Circus Control location. He is a human-like character with large blue eyes, spherical joints, large brown eyebrows, and a toothy smile. He wears a big dark-red bowtie, dark gray shorts with a white button, and brown sneakers with white laces. He also wears a striped flat hat and sleeveless shirt.

In Freddy Fazbear's Pizzeria Simulator, Little Joe is revealed to be a mascot of the candy brand Lally's Lollies as shown on one of the sponsor advertisements. 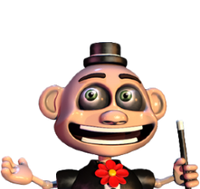 The Magician is a magician-like toy only seen in Sister Location from the Circus Control.

He later appears in Ultimate Custom Night as one of the decoration props for the Sister Location-themed Office. 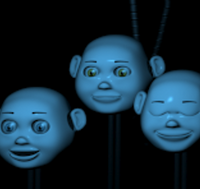 The animatronic human heads appear in Sister Location, and are found from the left side within the Primary Control Module, placed on top of the cabinet. They are three bald human heads with movable ears and face made out of rubber, allowing them to make mildly uncanny expressions. Underneath the heads are electronic pole-like necks.

In the Ultimate Custom Night, a total of five heads appeared in the Sister Location-themed Office.

Gypsy is a human-like toy with a neck ring. She only appeared in Sister Location, where she was seen on the cabinet from the right side of the Primary Control Module.

It's assumed that Gypsy is a electronic toy animatronic, similar to Theodore and Ella.