The classic animatronics are the robot entertainers of Freddy Fazbear's Pizza and the very first animatronics to be introduced in the Five Nights at Freddy's series. The group consists of the big four: Freddy Fazbear, Bonnie the Bunny, Chica the Chicken and Foxy the Pirate Fox. They seem to have been designed and created by Fazbear Entertainment, Inc.'s co-founder Henry Emily.

The classic animatronics use very simple designs, with suits made of fabric and filled with crossbeams, wires and other animatronic parts placed on metal endoskeletons. Giving the impression of cartoon animals, they wear accessories and have four fingers per hand. They also have a single set of teeth on the lower jaw, with the exception of Foxy, who also has teeth on the upper jaw. Said teeth are square in the cases of Freddy and Chica, but are round for Bonnie and sharp and triangular for Foxy.

In the first game, the animatronics supposedly wander the pizzeria after-hours in a "free-roaming mode" (due to their servos apparently locking up if they stay in place for too long) and sometimes coming after people such as Mike Schmidt, confirmed by Phone Guy during his call on Night 1.

Because the security guard is at the establishment after business hours, the animatronics won't recognize him as a human; rather, they will think the player is simply an endoskeleton without a costume on. As this is against the rules, they will attempt to forcefully stuff the player into an animatronic suit (despite this, the animatronics often pass the endoskeleton Backstage and make no attempt to stuff it inside a suit, which may simply be an oversight). Unfortunately, survival inside the suits is impossible as they are filled with crossbeams, wires, animatronic machinery and other electronic-mechanical structures, especially around the facial area. The only parts of the human body that would be visible through the suit are the eyeballs and teeth, which pop out of the front of the suit's mask. This ends up killing the player as seen on the "Game Over" screen in the first game.

In the second game, the original animatronics' pre-rebuilt versions aren't left on a free-roaming mode at night. Instead, during construction they were never given a proper night mode, so when they don't hear noise they think they're in the wrong room. They then try to find the nearest source of noise in an attempt to find a room with potential customers - in this case, the Office where the night security guard is. However, like the first game, upon sighting a person after-hours the animatronics believe the person is an endoskeleton without a suit on. Thus, they will attempt to forcefully stuff them into an animatronic suit, killing them in the process.

Although it’s assumed by employees of Fazbear Entertainment that the animatronics attack people because of faulty designs and glitches, there is a secret reason for the animatronics' homicidal tendencies involving the paranormal. The animatronics are haunted by the victims of the Missing Children Incident who were murdered by Fazbear Entertainment's other co-founder William Afton. As a result, the noises made by the animatronics are often theorized to be the cries and screams of said children. Another animatronic known as the Puppet who was haunted by William’s first victim, a girl named Charlotte Emily, put the souls of the victims into Freddy, Bonnie, Chica, Foxy and the mysterious Golden Freddy in order to resurrect them so they may have vengeance. The souls of the children who control the animatronics are blinded by rage and mistake adults for William. They will not rest until they kill the man who took their lives and finally have their happiest day and ascend to the afterlife. 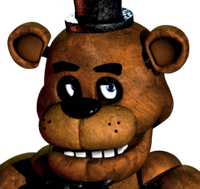 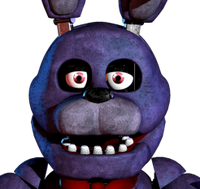 Bonnie is an animatronic rabbit and guitarist of the animatronic band at the left side of the stage from Freddy Fazbear's Pizza. He first appeared in Five Nights at Freddy's where he first becomes active as early as on Night 1. 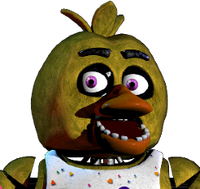 Chica is an animatronic chicken and backup singer of the animatronic band at the right side of the stage from Freddy Fazbear's Pizza. She first appeared in Five Nights at Freddy's where she first becomes active very late on Night 1. Her companion is Mr. Cupcake. 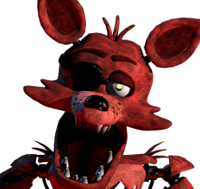 Foxy is an animatronic fox and discontinued pirate entertainer from Freddy Fazbear's Pizza. He resides in his Pirate Cove, where he first appeared in Five Nights at Freddy's where he becomes fairly active on Night 2.