Circus Control is a location from Five Nights at Freddy's: Sister Location. It is located in front of the Circus Gallery of Circus Baby's Entertainment and Rental.

The Circus Control room contains a control machine, pipes, hanging wires, three fans from the right, four colored lights from above, and two security cameras. A poster of Circus Baby with her Bidybabs can be seen from the right side of a window.

The room also contain two dolls. One on the right side of the control panel with a black uniform, top hat, a red flower, and a magic wand. There is another doll on the left with a blue/purple striped shirt and flat hat, red bowtie, a single white button, and a pair of brown shoes, revealed to be named Little Joe.

The back view of Circus Control from under the desk.

The Edge of the desk from the inside

A texture for the desk door.

Circus Control while the power is down.

Circus Control during a controlled shock.

The Circus Control text from the Breaker room Map.
Add a photo to this gallery 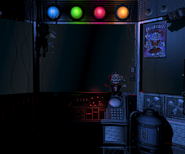 Circus Control in the extra menu.

Circus Control in the game's trailer.
Add a photo to this gallery
Retrieved from "https://freddy-fazbears-pizza.fandom.com/wiki/Circus_Control?oldid=3264402"
Community content is available under CC-BY-SA unless otherwise noted.