The circus animatronics are animatronics based on the themes of carnivals and circuses. They appeared in Five Nights at Freddy's AR: Special Delivery as limited time-only custom skins for the animatronics.

They were first introduced on September 3, 2020 for the Dark Circus Event, which was already started on August 27, 2020. Dark Circus: Encore!, a DLC expansion pack for the event was released on December 13, 2021, creating a new game-mode that takes place in a mixed reality environment.

The animatronics are modelled around pre-existing animatronics, and based on various types of performers featured in a circus. 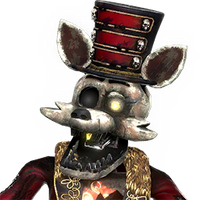 Ringmaster Foxy is a version of Foxy and the first circus animatronic skin released on September 3, 2020, a week after Ballora was added. He is also Foxy's second skin, with the first being Radioactive Foxy from the Wasteland Event.

His apparels, as his name suggests, are based on a circus ringmaster. He wears black pants, a red coat with golden threads, a top hat decorated with red straps and a total of six small skulls, and a golden key chain. His suit color is a light grayish-brown with faint-looking deteriorated textures, and his teeth are black with a single golden tooth. A bright orange oval is on the center of his chest, along with holes torn into his suit akin to the original Foxy. His left eye glows yellow and he wears no eyepatch for his right eyeless socket. A long, black whip replaces both his hook and a chunk of his right arm. 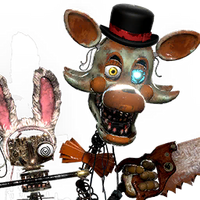 Magician Mangle is a version of Mangle and the second circus animatronic skin released on September 10, 2020. They are Mangle's first released skin.

Magician Mangle carries magician's items, while wearing a magician's hat with a red stripe and an orange bow tie, along with their second head wearing white rabbit ears (referencing the most common form of hat-trick talents) and holding a magician's wand in its mouth. They also have several playing cards strung among their wires. Their suit color is light-gray, with orange textures on their cheeks, ears and around their mouth instead of brown. Mangle's right eye remains normal, while their left glows blue, and their second head doesn't have Mangle's normal eye, but rather an eye with a black and white hypnotic spiral. Mangle's blue eye gives them telekinesis abilities, being able to levitate and spin three deadly knives in the air. Mangle carries a handsaw, a tool popularly used when magicians pretend to saw people in half. 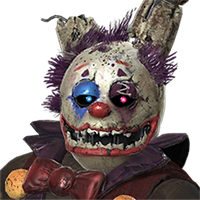 Clown Springtrap is a circus version of Springtrap as well as the third and final animatronic skin who was added on September 17, 2020. He is also Springtrap's third skin to be implemented, after Flaming Springtrap and Toxic Springtrap.

Clown Springtrap's face has white-gray clown make-up, having a smug, toothy grin with red lipstick smack dab across his mouth, while lacking hinge joints. He has mismatched glowing eyes: his right eye glows blue, while his left is red. The left eye also has a zig-zag line on the eyelid, and his right eye has a smeared blue paint. He wears a red overweight tuxedo with red suspenders that have yellow buttons (along with a pink flower, a reference to the classic water squirting flower), white musky gloves, torn brown pants and large red clown shoes. He also has purple streamers laced on the bottom of his robe, on one of his shoes (which is neatly wrapped into a bow) and even some sticking out on the top of his head. Clown Springtrap's main equipment of choice is a gigantic, wooden mallet patterned with red diamonds. 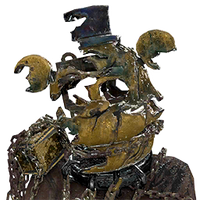 Great Escape Golden Freddy is a circus skin of Golden Freddy and can be considered the bonus fourth circus animatronic skin, which was added for Dark Circus: Encore! on December 13, 2021. He is Golden Freddy's first skin.

Great Escape Golden Freddy is based on an escape artist in a circus, residing in a gigantic tank filled with water. He keeps his signature golden color, although some parts of him such as his face, ears and even all of his toes are covered in mold. His ears and top hat have been torn apart, as if they were bitten off. The top hat also has a green stripe on it, as opposed to the original Golden Freddy. A good chunk of his head, particularly the left half of it, have suffered heavy damage exposing gaping holes in his frame. The left half of his head is nearly entirely open, revealing part of his endoskeleton head. His eyes have also been removed. Great Escape Golden Freddy's body is restrained by a brown straightjacket, with golden chains and locks surrounding it, alongside tying up the top of his legs and even covering his mouth. Finally, two large ball and chains are attached to his legs to prevent further movements. Despite all these confinements, Great Escape Golden Freddy still has the strength to break out of the water-filled tank and move freely on land.