Two chocolate animatronic skins, Chocolate Freddy and Chocolate Chica, were released as merchandise by Funko. Whether both skins earn a possible chance to get implemented to Special Delivery's future update is unknown.

Based on the classic animatronics, their suits are completely made out of different chocolate flavors and other sweets, with some parts bitten off to reveal candy-textured endoskeletons. 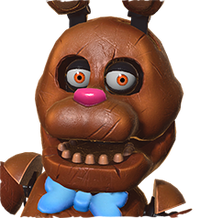 Chocolate Bonnie is a chocolate variant of Bonnie and added on April 10, 2020 as the Easter event's first skin. He is Bonnie's first featured animatronic skin.

One of the most recurring animatronic skins, Chocolate Bonnie returned on June 23, 2020 for a little bit to celebrate his own exclusive merchandise line. He later reappeared once again on September 24, 2020 for a mini event. 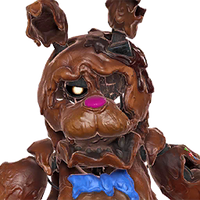 His appearance resembles that of Chocolate Bonnie, but his suit is melted and rather deformed. He is missing his left eye, and his right eye has black sclera with glowing orange/yellow iris. 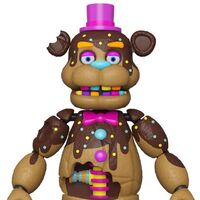 Chocolate Freddy is a Funko figurine based off the chocolate animatronics that released in March 2021. He is currently not in Five Nights at Freddy's AR: Special Delivery.

He appears as a chocolate colored version of Freddy with darker shades of chocolate dripping on him. He has a pink colored hat and bow-tie, and his right ear has a bite in it. There is a bite in his stomach revealing his multicolored endoskeleton. He also has multicolored buttons and teeth. 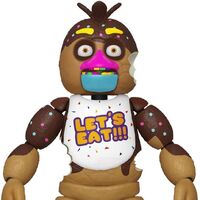 Chocolate Chica is a Funko figurine based off the chocolate animatronics that released in March 2021. She is currently not in Five Nights at Freddy's AR: Special Delivery.

She appears as a chocolate colored version of Chica with darker shades of chocolate dripping on her. Her beak is multicolored and her feet are white. She has two bites on both sides of her torso, as well as a bite on the left side of her head.