Chica is one of the animatronics in the Five Nights at Freddy's novel trilogy. She appears an antagonist and supporting character in the first two novels respectively.

Chica first appears in Chapter 2, where Charlie and the group come to visit Freddy's. She is seen again in the second visit as well.

In the third visit, however, while she is performing with Freddy and Bonnie. The animatronics suddenly haywire and escape the stage.

The next day, when the group goes back to Freddy's to save Carlton. Chica is seen where she is staring at Carlton and Charlie. She is then seen again where she surrounds the group from leaving, however Charlie electrocutes her with wires from the cycling.

Before, Chica and the other animatronics were about to kill Charlie and the group, Golden Freddy appears and stops the four of them from harming them.

Chica along with the other animatronics grab William's corpse as they walk away.

Like the rest of her fellow animatronics, Chica is first seen deactivated in Clay Burke's boiler room. John, Jessica, and Clay arrive at Clay's home to ask the animatronics help to save Charlie from the clutches of William Afton and his twisted abominations. However, Chica and others don't respond at first, that is until John mentions "William Afton." At the sight of hearing that name, the original animatronics (excluding Golden Freddy) go berserk and immediately take off to search for their long-awaited nemesis. Later on, when the heroes are cornered by Twisted Freddy, Twisted Bonnie, and Twisted Wolf in Afton's hideout, Chica manages to arrive in time. She and Bonnie then fight against Twisted Bonnie, working together to dismantle the imposter and turn him into scrap metal for good. However, she and the others strangely disappear when Afton's hideout collapses.

Chica herself doesn't appear in the third novel, but alongside her animatronic companions, her Endoskeleton was melded into an amalgamation, a source of remnant for William Afton.

Chica as seen in the background along with Bonnie and Foxy on the first cover of The Silver Eyes, while Freddy is seen upfront.

Chica as seen on the cover along with Freddy, Bonnie, and Charlie. 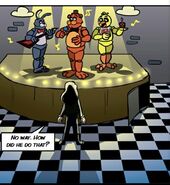 Chica on stage along with Freddy and Bonnie
Community content is available under CC-BY-SA unless otherwise noted.
Advertisement